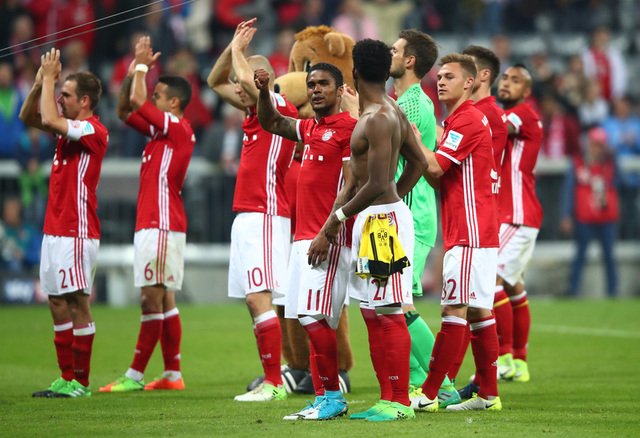 Bayern Munich outclassed Borussia Dortmund 4-1 on Saturday with top scorer Robert Lewandowski netting twice to protect their 10-point lead at the top of the Bundesliga, as they charge towards a record-extending fifth straight league title.

The showpiece encounter, broadcast to more than 200 countries, turned out to be a one-sided affair, with Lewandowski taking his league tally to 26 goals in a flawless dress rehearsal ahead of next week’s Champions League quarter-final against Real Madrid.

Franck Ribery and Arjen Robben were also on target for Bayern, who moved up to 68 points, 10 ahead of RB Leipzig, 1-0 winners against Bayer Leverkusen, with six matches left in the campaign. “We are prepared for Real,” Bayern coach Carlo Ancelotti said. “We played very well. It was an open first half and Dortmund had their chances. But after Arjen Robben’s goal (for 3-1) we controlled the game.”

Dortmund, who face Monaco in the Champions League, were on the backfoot from the start and crumbled under Bayern pressure.

The Ruhr valley club are stuck in fourth on 50 points, one behind Hoffenheim, who lost 2-1 at Hamburg SV.

The Bavarians got off to an explosive start and were 2-0 up after only 10 minutes with 34-year-old Ribery completing a dazzling move that wrongfooted the entire Dortmund defence twice in the fourth minute.

The hosts never stopped charging forward and Dutchman Robben was denied four times in the first half with his trademark move, cutting in from the right.

The 33-year-old winger finally got his goal four minutes after the restart, firing an unstoppable left-footed shot past Buerki.

Lewandowski was then brought down by the keeper and the 28-year-old scored from the spot to move one goal ahead of Dortmund’s Pierre-Emerick Aubameyang in the Bundesliga scorers’ list.

A shoulder injury scare that led to his substitution turned out to be less serious than initially feared.

“It is bruised but it is not too bad,” Lewandowski said. “I just did not want to risk it ahead of Wednesday.”

RB Leipzig scored a stoppage-time goal through substitute Yussuf Poulsen to snatch a 1-0 victory over Bayer Leverkusen but ended the game with 10 men after captain Willi Orban was sent off.

Schalke 04 scored twice in each half to crush strugglers VfL Wolfsburg 4-1 and climb up to 10th on 37 points. The result left Wolfsburg, the 2009 Bundesliga champions, in 14th place, a point above the relegation playoff spot.

Cologne dropped to sixth after slumping to a 3-2 home loss against Borussia Moenchengladbach thanks to Lars Stindl’s 80th-minute winner.

When it is possible to have town planning decisions annulled