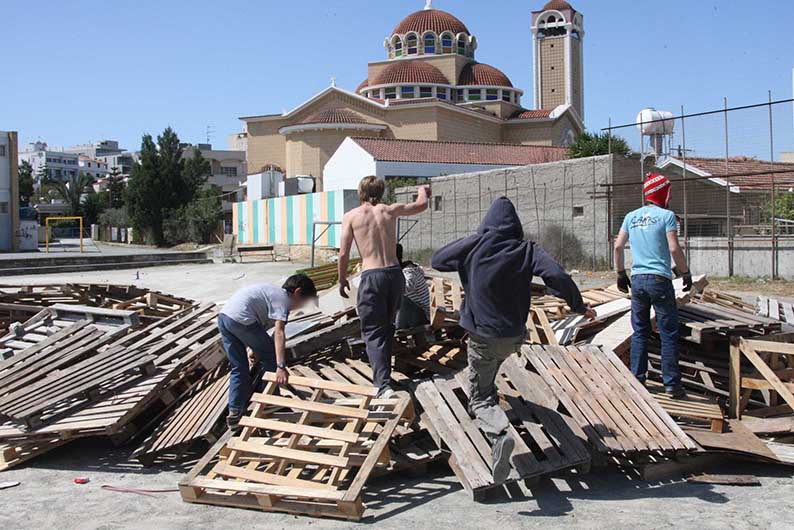 Teenager turf wars over prized pieces of wood for the Easter bonfire or lambradjia are commonplace, but a particularly vicious one in Nicosia over the weekend caused trees to catch fire and diverted traffic on a busy road, an eye witness said.

The trouble started a few nights ago when groups of youngsters were fighting near the church in Ayios Omologites, Nicosia and five police patrol cars had to intervene, resident Mary Constantinidou said on Monday.

“They have always yelled, but this was much worse,” Constantinidou said.

On Sunday night the troublemakers met again and actual fires were set. It is illegal to light the lambradjia until after the church service on Easter Saturday.

The first fire started around 9pm and a cabin on the plot earmarked for the Easter bonfire was set alight or caught fire. The fire services were called to extinguish the blaze, but the troubles didn’t end there, Constantinidou said.

Another fire started at around 1am on Monday, this time scorching some big trees she said.

Materials were thrown around and the disturbance spread to the main road leading to the presidential palace on Demosthenis Severis avenue, she said.

“Cars passing had to divert. There was also one of the big green garbage bins thrown in the middle of the side road leading to the primary school so people couldn’t drive there either.”

For the second time that night fire services and police had to step in.

On Monday Constantinidou contacted both the police and the Nicosia municipality and urged them to ban this year’s Easter bonfire on Saturday.

“I told them I don’t feel safe,” she said, “but at the police station I was told they cannot prohibit it, while the municipality said all they can do is pick up wood and advised me to talk to police.”

A police spokesman on Monday confirmed the incident but said that it was nothing out of the ordinary.

Meanwhile, police announced on Sunday that they have intensified their efforts to control hooligans in the lead up to Easter.

They said they would be targeting open areas such as parks, schools, churches and other areas where young people are likely to create disturbances. They have their eyes on more than a hundred youngsters who they say are known for disturbing the peace by lighting fires and using firecrackers.

They disperse the gangs and send the youths home while getting rid of any materials which can be burned.

“We don’t arrest them,” a police spokesman said on Monday, “we only arrest people for serious crimes.”

Traditionally, bonfires are lit on Easter Saturday to burn a replica of Judas. In the weeks before Christmas, boys collect wood and old furniture to make as a large a bonfire as possible.