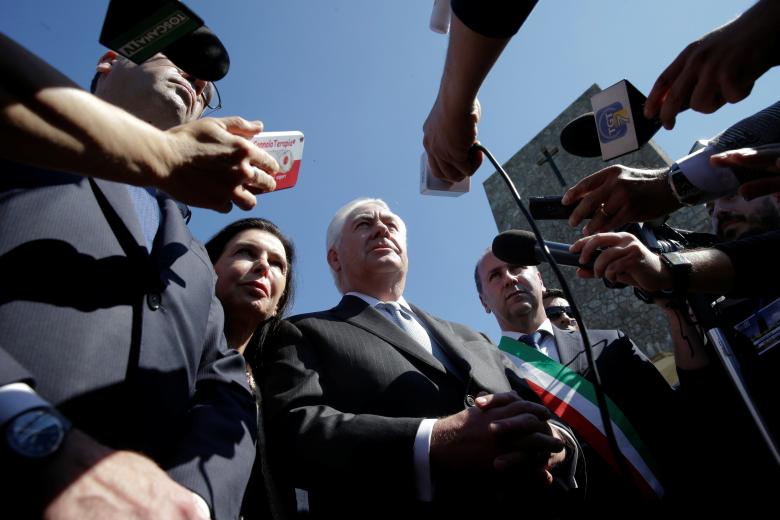 The United States will hold responsible anyone who commits crimes against humanity, Secretary of State Rex Tillerson said on Monday, days after the US military unexpectedly attacked Syria.

Tillerson is in Italy for a meeting of foreign ministers from the Group of Seven (G7) major industrialised nations, with his counterparts from Europe and Japan eager for clarity from Washington on numerous diplomatic issues, especially Syria.

Before the April 7 missile strikes on a Syrian airbase, US President Donald Trump had indicated he would be less interventionist than his predecessors and willing to overlook human rights abuses if it was in US interests.

But Tillerson said the United States would not let such crimes go unchallenged. “We rededicate ourselves to holding to account any and all who commit crimes against the innocents anywhere in the world,” he told reporters while commemorating a 1944 German Nazi massacre in Sant’Anna di Stazzema.

Trump ordered his military to strike Syria in retaliation for what the United States said was a chemical weapons attack by President Bashar al-Assad’s forces which killed scores of civilians, including many children.

European ministers are eager to hear whether Washington is now committed to overthrowing Assad, who is backed by Russia. They also want the United States to put pressure on Moscow to distance itself from Assad.

Tillerson, who travels to Russia after the two-day G7 gathering, said at the weekend that the defeat of Islamic State remained the US priority, while the US Ambassador to the United Nations Nikki Haley said that “regime change” in Syria was also a priority for Trump.

The mixed messages have confused and frustrated European allies, who are eager for full US support for a political solution based on a transfer of power in Damascus.

“The Americans say they agree, but there’s nothing to show for it behind (the scenes). They are absent from this and are navigating aimlessly in the dark,” said a senior European diplomat, who declined to be named.

Italy, Germany, France and Britain have invited foreign ministers from Turkey, Saudi Arabia, United Arab Emirates, Jordan and Qatar to sit down with the G7 group on Tuesday morning to discuss Syria. All oppose Assad’s rule.

The foreign ministers’ discussions in Tuscany will prepare the way for a leaders’ summit in Sicily at the end of May.

Efforts to reach an agreement on statements ahead of time – a normal part of pre-meeting G7diplomacy – have moved very slowly, partly because of a difficult transition at the U.S. state department, where many key positions remain unfilled.

Some issues, such as trade and climate change, are likely to be ducked this week. “The more complicated subjects will be left to the leaders,” said an Italian diplomat, who declined to be named because he was not authorised to speak to the press.

However, the foreign ministers will talk about growing tensions with North Korea, as the United States moves a navy strike group near the Korean peninsula amid concerns over Pyongyang’s nuclear ambitions.

They will also discuss Libya. Italy is hoping for vocal support for a United Nations-backed government in Tripoli which has struggled to establish its authority even in the city, let alone in the rest of the violence-plagued north African country.

The Trump administration has not yet defined a clear policy and Rome fears Washington may fall into step with Egypt and Russia, which support general Khalifa Haftar, a powerful figure in eastern Libya.

The struggle against terrorism, relations with Iran and instability in Ukraine will also come up for discussion, with talks due to kick off at 4.30 pm (1430 GMT) on Monday.

Easter events for all

Rage at state as Egypt’s Christians dig graves after bombing