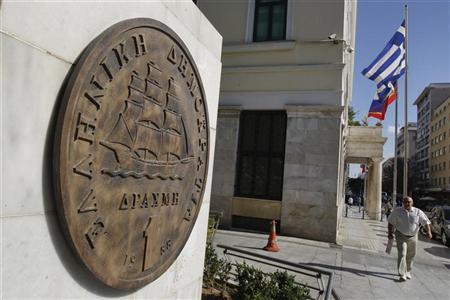 A man makes his way next to a replica of a one drachma coin outside the Athens Town Hall May 15, 2012

Greek ministers and inspectors from the European Union and the International Monetary Fund will resume talks over a bailout review in Athens in late April, sources close to the negotiations said on Monday.

Last week, Greece and its official lenders reached a preliminary deal on measures Athens must implement after its current bailout expires, the first breakthrough in talks over reforms after months of acrimonious wrangling that revived fears of a new crisis in the eurozone.

A conclusion of the review will unlock vital loans needed by Athens to make debt repayments in July.

EU/IMF missions will return to Athens to put the final touches to the preliminary deal later in April said one source. Another source said they were likely to return after IMF meetings on April 21-23. Negotiations on post-bailout targets continue.

“The talks are expected to be wrapped up before a meeting of eurozone finance ministers in May,” one of the sources said.

Athens agreed on extra steps to convince the IMF, which remains sceptical about Greece’s fiscal and reform progress, to take part in its €86bn bailout, its third since its debt crisis emerged eight years ago.

The leftist-led government agreed to cut pensions by 1.0 per cent of gross domestic product in 2019, a year after its bailout programme ends, and committed to tax reforms in 2020 to generate additional revenue equal to another 1 per cent of GDP.

IMF participation is sought by eurozone countries and Germany in particular as it faces national elections and wants to add credibility to Greece’s third rescue package.

Athens has lowered wages and cut pensions 12 times since 2010 to fix its public finances and will hold an election in 2019.

To make the deal more palatable for Greece, the lenders agreed that if budget savings targets are exceeded, Athens will be allowed to implement relief measures to boost the economy.

On Sunday, Tsipras said the additional austerity measures would be implemented on condition of further debt relief.

But Germany wants Greece to implement reforms before any consideration of whether more debt relief is needed, the German finance ministry said on Monday.

“Talks on debt relief won’t be easy,” another source said.

Rose takes Masters heartache on the chin after epic duel