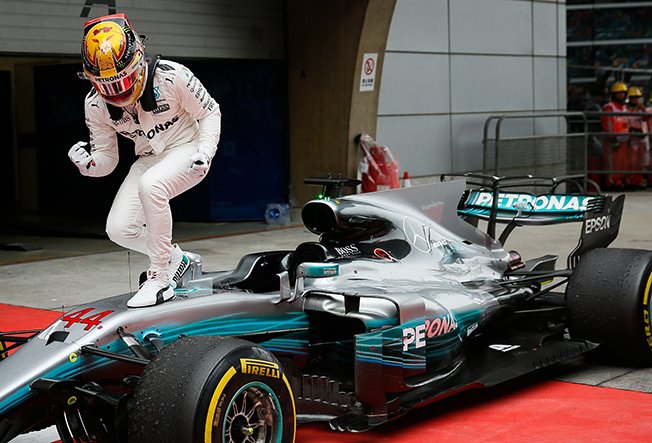 Lewis Hamilton is yet to test against himself against Sebastian Vettel, who swept to four successive titles with Red Bull before Mercedes began their three-year spell of dominance

Lewis Hamilton predicted his 2017 tussle with Sebastian Vettel will be one of the closest ever title runs after the two dominant Formula One drivers set the pace in this year’s championship.

Hamilton struck back at his Ferrari rival in Sunday’s Chinese Grand Prix, winning the 56-lap race ahead of the German, a fortnight after Vettel beat the Mercedes driver in the season-opener in Australia.

The duo, who between them have won the drivers’ title for six of the last seven seasons, are locked on 43 points apiece on top of the standings heading into the next round in Bahrain.

“I think it’s going to be one of the closest ones, if not the closest, I’ve personally ever experienced,” Hamilton said on the podium.

“I love this fight that we’re having.”

The 32-year-old is no stranger to close title runs.

Hamilton finished tied on points with then team-mate Fernando Alonso in 2007, the McLaren pair ending the season one point behind champion Kimi Raikkonen of Ferrari.

He also won two of his three titles in last-race showdowns. In 2008, he beat Ferrari’s Felipe Massa to his debut title by passing a car on the last corner of the final lap of the last race.

The last three seasons were spent battling it out with Mercedes team-mate Nico Rosberg, with the title charge twice going down to the wire.

But Hamilton is yet to test against himself against Vettel, who swept to four successive titles with Red Bull before Mercedes began their three-year spell of dominance.

“The scenario I’m in right now, I’m up fighting against a four-time world champion who is at his best and he is phenomenally quick,” said Hamilton.

“The ultimate fighter always wants to go up against the best… because then when you come out on top, it’s just so much more satisfying.”

For his part Vettel, who hopes to emulate boyhood hero Michael Schumacher by winning the title for Ferrari, is also excited about measuring himself against the driver who succeeded him as champion.

“He’s proven to be one of the quickest drivers on the grid,” Vettel said after his win in Australia.

“I would love to have a close battle.”