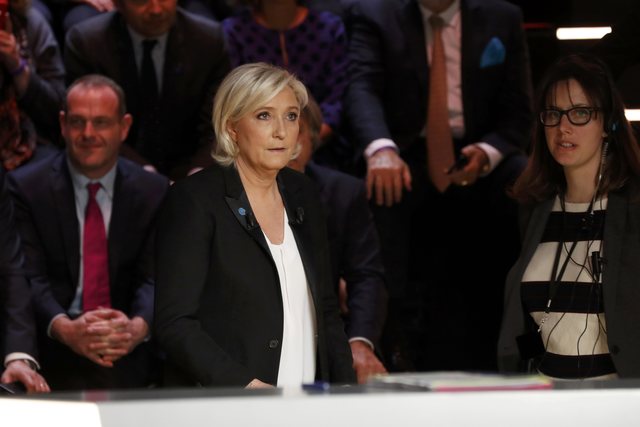 Far-right presidential candidate Marine Le Pen has touched a raw nerve in France by denying the French state’s responsibility for a mass arrest of Jews in Paris during World War Two.

Le Pen, a frontrunner in the election being held this month and next, triggered an outcry with her comments on one of the darkest episodes of French history when the country was occupied by the Nazis during the war.

“I think France isn’t responsible for the Vel d’Hiv,” Le Pen said in a French media interview on Sunday, referring to the July 16, 1942 German-ordered roundup by French police of 13,000 Jews in Paris.

Most of the Jews were crammed in appalling conditions into the Velodrome d’Hiver or Winter Velodrome cycling stadium, colloquially known as the Vel d’Hiv, before being deported to the Auschwitz extermination camp.

“I think that, in general, if there are people responsible, it is those who were in power at the time. It is not France,” Le Pen said in comments that were condemned by other presidential candidates, a Jewish group and Israel’s Foreign Ministry.

“We have taught our children that they had every reason to criticise France, to see only the darkest historical aspects perhaps. I want them to be proud of being French once more,” she said in the interview with media organisations Le Figaro, RTL and LCI.

France has long struggled to come to terms with its role under the collaborationist Vichy regime during World War Two.

In 1995, then President Jacques Chirac recognised that the French state shared responsibility for deporting Jews to Nazi death camps during the war, the first time a post-war French head of state had fully acknowledged France’s role.

Socialist President Francois Hollande in 2012 described the 1942 mass arrest as “a crime committed in France, by France.”

Her comments, just as campaigning officially opened in the election, could set back her attempts to clean up the image of her anti-immigration National Front and distance it from the anti-Semitic views of her father, Jean-Marie Le Pen, the party’s founder.

Le Pen is running neck-and-neck with centrist Emmanuel Macron in the April 23 first round, according to opinion polls. The polls say Macron would easily beat Le Pen in the May 7 runoff.

Le Pen issued a statement late on Sunday saying she considered that the French state was in exile in London during the occupation and that her stance “in no way exonerates the effective and personal responsibility of the French people who took part in the horrible Vel d’Hiv roundup and in all the atrocities committed during this period.”

“This contradicts the historical truth as expressed in statements by French presidents who recognised the country’s responsibility for the fate of the French Jews who perished in the Holocaust,” a spokesman said, adding that the ministry regretted that anti-Semitism “is raising its head again today.”

“Some people had forgotten that Marine Le Pen is the daughter of Jean-Marie Le Pen. They haven’t changed and we must have no indulgence or minimise what the National Front is today in our country,” Macron told BFM television.

Socialist candidate Benoit Hamon said there was no longer any doubt that Le Pen was from the extreme right.

In a statement, Ghozlan called on French citizens to mobilise in the election to block Le Pen “and prevent her from sullying once again the honour of France and the memory of the victims of the Vichy regime.”