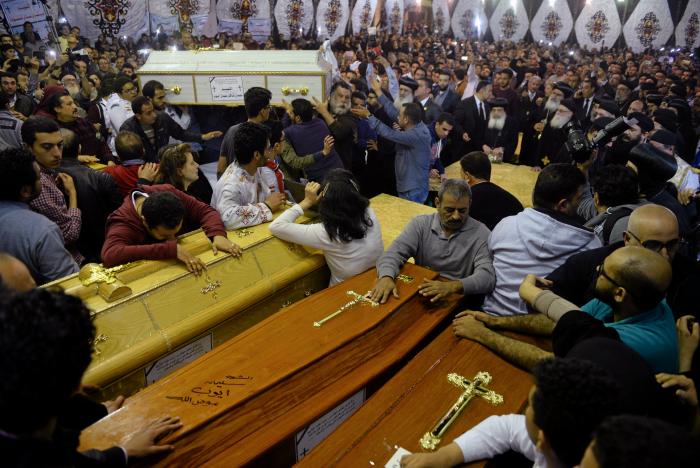 Relatives of victims react to coffins arriving to the Coptic church that was bombed on Sunday in Tanta, Egypt, April 9, 2017

Egyptian Christians wept with rage on Monday as they recovered the bodies of loved ones killed in twin church bombings, furious at a state they believe will no longer protect them from neighbours bent on their murder.

Forty-four people were killed in the attacks on Palm Sunday, a joyous festival a week before Easter when Christians celebrate the triumphant arrival of Jesus in Jerusalem.

At Tanta University hospital morgue, desperate families were trying to get inside to search for loved ones. Security forces held them back to stop overcrowding, enraging the crowd.

“Why are you preventing us from entering now? Where were you when all this happened?” shouted one women looking for a relative. Some appeared in total shock, their faces pale and unmoving. Others wept openly as women wailed in mourning.

A middle-aged man who had just stepped out of the morgue after seeing his dead brother stood with his face buried in his hands weeping. “You sons of bitches,” he shouted as his family tried to calm him.

Hours after the attack, Kerols Paheg and other young Coptic Christians were already digging graves in the basement of the devastated St George Church in the northern Nile Delta city, where the first of the bombs exploded, killing 27 and wounding around 80.

He showed photos on his phone of the carnage: human remains, blood and shattered glass strewn across the floor of the church on one of the holiest days in the Christian calendar. “Today was supposed to be a day of festivity,” he said.

From now on, Christians will have to protect their churches themselves, rather than rely on the police, “because what’s happening is too much. It’s unacceptable,” he said.

Copts make up about 10 per cent of Egypt’s 92 million people, the largest Christian minority in the Middle East. Yet despite a presence dating back to the Roman era, the community feels increasingly ostracised and has repeatedly been targeted in attacks, including by Islamic State, which claimed responsibility for Sunday’s bombings.

Hours after the blast in Tanta, the second bomb blew up at the entrance to Saint Mark’s Cathedral in Alexandria, the historic seat of the Coptic pope, killing 17 people including three police officers and wounding 48.

Pope Tawadros had been leading the mass at the time of the blast but escaped unharmed, the Interior Ministry said.

Though Islamic State has long waged a low-level war against soldiers and police in Egypt’s Sinai peninsula, its stepped up assault on Christian civilians in the mainland could turn a provincial insurgency into wider sectarian conflict.

On Sunday, the group warned of more attacks and boasted of the number of people killed by three church bombings it says it has carried out since December: 80.

President Abdel Fattah al-Sisi has promised to protect the Christian minority as part of a campaign against extremism. But Copts in Tanta said security was almost non-existent on Sunday despite repeated warnings in recent weeks.

A senior police official told Reuters a bomb was discovered and disabled near the Tanta church about a week ago.

“That should have been an alarm or a warning that this place is targeted,” said 38-year-old Amira Maher, who was waiting for her injured brother at a nearby hospital.

“Especially Palm Sunday, a day when many people gather, more than any other time in the year… I don’t know how this happened,” she said.

Milling about the charred church interior, as if trying to take in the enormity of the attack, several members of the community expressed dismay at what they said was lax security.

Tanta priest Tawfik Kobeish expressed perhaps the most common of all emotions among the grieving: disbelief.

“We were not expecting people who live with us in the same country, people with whom we’ve shared love and friendships, and with whom we’re familiar, to do these things,” said Kobeish, the sound of ambulances bearing the wounded echoing outside.

US to respond to crimes against ‘innocents’ (Update)