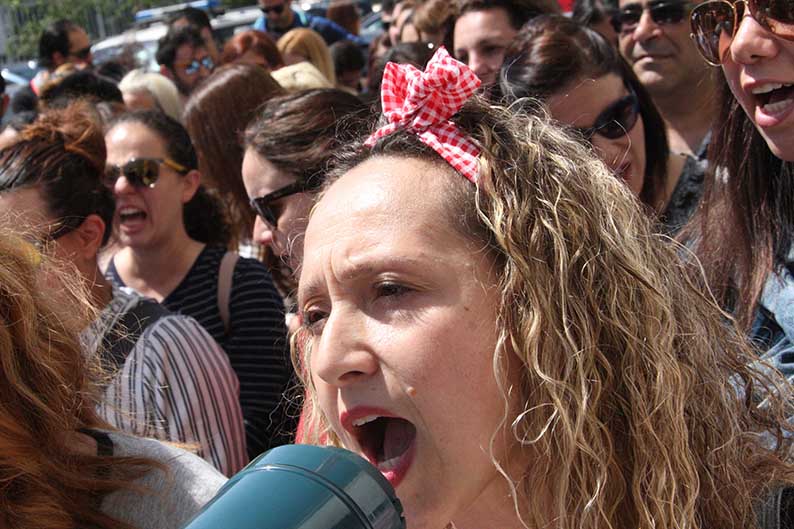 Teachers protesting outside the education ministry on Tuesday (Christos Theodorides)

Education Minister Costas Kadis told hundreds of teachers protesting over certain conditions of a new appointment system on Tuesday that postponing its implementation was out of the question.

Primary school teachers’ union Poed is demanding that the new, merit-based system be postponed until colleagues who have been working as temporary teachers for more than 30 months are given open-ended contracts.

Hundreds of primary education teachers marched from the education ministry to the Presidential Palace with banners saying “No to the new appointment system”, and shouting “no more injustice done to the new generation”.

The new procedures do not automatically ensure that present teachers on temporary contracts will be given permanent postings.

The union is demanding otherwise and has pointed to a recent ruling by the Labour Disputes Court that granted a teacher who had completed a 30-month service the right to be given an open-ended contract, which has set a precedent. Poed has urged some 350 teachers in a similar position to demand the same treatment. The state legal services appealed the decision.

Kadis said that the issue had been discussed extensively during the preparation of the bill on the new procedures that was passed by parliament in 2015, and that the ministry was now in the process of seeing it implemented.

During discussion of the issue, Kadis said, the state legal services had ruled that it was impossible to safeguard this group of teachers.

“This is why we made other arrangements, for example, around 1,500 permanent appointments within the last three years that largely tackled this sensitive issue,” he said.

The new system favours experience so this group will have an advantage over newcomers vying for a post, he added.

“I believe that the ministry and the state in general did what they could,” Kadis said.

Commenting on the court case Poed has based its demand on, Kadis said that if new data were to emerge, his ministry was ready to reassess ways of addressing this issue.

“But what we are not willing and will not discuss is the postponement of the new appointment system,” Kadis said, adding that it had been necessary since the 1980s.

Main opposition party Akel on Tuesday said the new procedures were nothing more than a “pre-election firework” of the Anastasiades administration as it will have thousands of candidates taking exams months before the elections and are knowingly selling false hopes. The results, meanwhile, will not be announced until March, after the elections. These candidates have very slim chances of getting one of the few job posts available, the party said.

At same time, the party said, by appealing the legal precedent created by the court case, the government is buying time “to complete the pre-election firework”. This however, Akel said, will “bequeath” to ensuing administrations a huge cost as they would have to either re-hire the teachers that have more than 30 months’ service or compensate them.

US-backed forces push back IS in Raqqa campaign – officials