Water security has gained considerable attention worldwide in the past decade. The World Economic Forum, an annual gathering of the world’s political and business leadership in Davos, Switzerland, has consistently ranked water security among its top concerns for a number of years. However, the achievement of water security – or the universal access to water for sustaining livelihoods and human well-being, and protection against water-related disasters – remains elusive.

At greatest risk are countries that are faced with water scarcity, lack the capacity to accommodate growing water demands or both. This description of water insecurity fits almost all developing countries, but the following regions are particularly at risk: sub-Saharan Africa, Central Asia, South Asia, the Middle East and North Africa.

The water security of many island states in the southern Pacific and the Indian oceans is also under grave threat. Impacts on the quality and quantity of available water as a result of changing climate trends are forecasted to further exacerbate the situation.

It has been argued that water security is not only central to the achievement of various economic and development objectives; its absence can actually roll back gains already achieved in the past decades. Lack of water security can create a domino effect resulting in crop failure, energy disruptions, health crises, economic deprivation, and eventually, social unrest.

Many cite the ongoing civil war in Syria as an example in which the collapse of agricultural systems due to water shortages was a major trigger for social unrest in 2010 and 2011. In the unfortunate case of a country imploding, in part due to water-related social and economic stresses, the fallout does not remain restricted to its geographical boundaries. The flux of refugees and immigrants, reaching considerable proportions even before the Syrian crisis, is just one such example. Other shocks to the global economy are not bound by political borders either.

This situation begs the question: What can we do differently to avoid the doomsday scenario of a water insecure world?

Specifically, a new international water decade (2018-2028) offers a platform through which public awareness can be raised and requisite resources mobilized. A Canadian effort, supported by a consortium of universities and environmental organizations, is under development to mobilize international action to achieve the water-related SDGs, working under the umbrella of the new water decade. This Canadian consortium also aims to support a worldwide building of national and regional capacity, and identify celebrity champions who can help make the business case for investing in water security.

The precise scale of financial capital needed to reach universal water security has not been calculated. A 2013 United Nations report forecasts that achieving water-related SDGs could require as much as two percent of the global economy, or over $2 trillion a year. To state the obvious, finding this immense volume of money is not going to be easy. Clearly, some out-of-the-box thinking will be required.

Effectively engaging the private sector, while protecting the public interest, could be a game-changer by providing appropriate technologies and management expertise. Private-sector engagement opens up around $70 trillion of financial markets to find funding for water security initiatives. Similarly, eliminating corruption can help save as much as a third of financial capital currently being invested in the water sector – another game-changer.

The international community – including the UN, international aid agencies, development banks, and donors – must support and enable national governments. These international players can offer three types of assistance: provisioning of financial resources, formulation of supportive policies, and transfer of technology and expertise.

A 2012 report by the United States’ intelligence community offered a stark reminder on water security. It argued that countries linked to a number of problem-prone international river basins – Indus, Jordan, Mekong, Nile, Tigris-Euphrates, Amu Darya, Brahmaputra – are running the risk of instability, state failure, and increased regional tensions over the next decade. If the international community and national governments do not change their attitude towards water security, many countries might encounter destabilization and chaos.

Creating global partnerships to achieve universal water security is a matter of human survival that concerns us all, not just developing countries. 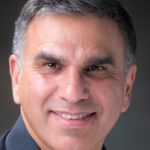 Dr. Zafar Adeel serves as the Executive Director of Pacific Research Water Centre and has over 25 years of experience in a broad range of environmental and policy issues. This includes over 18 years of work as a United Nations official. He also served in a number of international leadership roles including; chairing a group of nearly 60 organizations called UN-Water (2010-2012), and co-chairing the Millennium Ecosystem Assessment (2005). Through his editorial lead, this network has published eight books in the United Nation University Desertification Series. Presently, Dr. Adeel serves as the Series Editor for a book series by Springer: “Water Security in a New World.” He is the author of the book “East Asian Perspectives in Environmental Governance – Response in a Rapidly Developing Region (UNU Press 2003).” He has also Adjunct Professor of Engineering at the McMaster University.

The Easter feel in the capital