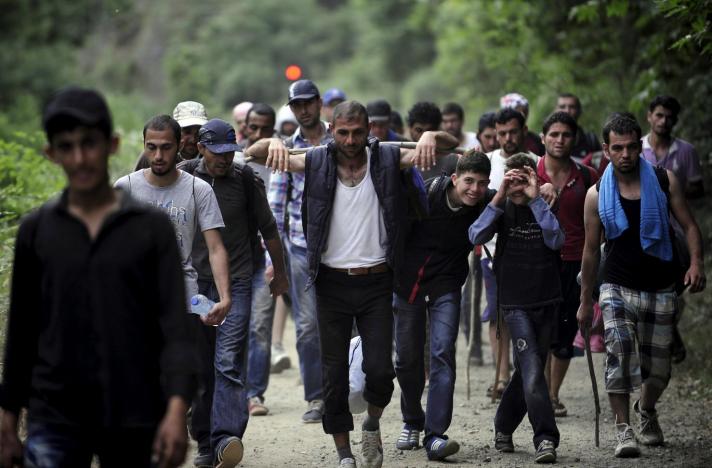 The European Union’s executive stepped up pressure on Poland and Hungary on Wednesday to take in asylum seekers under the bloc’s migration plan or risk legal action if their reluctant governments refuse.

Warsaw and Budapest have stonewalled the scheme to move 160,000 people from Italy and Greece – the main ports of arrival – to elsewhere in the EU. Other member states have also dragged their feet, leaving the divisive plan stalled.

The eurosceptic governments in Poland and Hungary have also put their media and judiciary under tighter state control, raising concerns in Brussels and other EU capitals that they are infringing on the bloc’s democratic checks and balances.

The influx of some 1.6 million refugees and migrants into the EU in 2014-2016 has led to rows on how to share the burden among member states. Only about 16,340 people have been moved so far under the emergency scheme that ends in September.

“If Member States do not increase their relocations soon, the Commission will not hesitate to make use of its powers … for those which have not complied,” the bloc’s executive arm said in a statement.

The Commission had proposed to fine member states for failing to take in migrants, but there has been little political backing for such a step. A court case would not resolve the issue quickly, but could add to mounting pressure for action from other EU states.

Italy has been in the forefront of calling for cuts to EU subsidies to Poland and Hungary over migration. Germany, Sweden, Austria and France – the most frequent final destinations – have also been stepping up pressure on the hold-outs.

Bulgaria, Croatia, Slovakia and the Czech Republic have taken in only a few asylum seekers and the European Commission also underlined their weak response to the plan.

The Commission statement recalled the relocation plan was decided by EU leaders in September 2015 despite Hungary, the Czech Republic, Slovakia and Romania voting against it. Although generally opposed to it, Poland eventually voted with majority.

In rare good news, Brussels noted that Austria has now decided to join the relocation programme. Vienna was previously exempted since it had taken in some 90,000 asylum seekers in 2015 as it sits on one of the key migratory routes into Europe.

Austria’s interior minister said he would make preparations for the country to receive people, with the first group expected to be around 50 unaccompanied children from Italy.

Some 14,000 people are currently eligible for relocation from Greece, the Commission said. It recommended that Italy speed up the necessary legal and security proceedings as it currently only has some 3,500 people waiting to be moved.

EU officials are split over whether to open legal proceedings over relocation, with some noting Poland and Hungary should be punished for undermining the bloc’s solidarity.

Others say that such so-called “infringements” would have to be launched against just about every EU state since so many cut corners on various agreements.

Hungary has filed its own lawsuit against the relocation scheme, which assigns each EU state a specific number of asylum seekers to receive. A hearing at the EU’s top European Court of Justice is due on May 10.

Poland’s and Hungary‘s disputes over migration with the bloc are just one area on which the two post-communist countries, now governed by eurosceptics, clash with Brussels and the wealthier western European states.

The bloc has voiced concern over the weakening of the rule of law and undermining of democratic standards by both Budapest under Prime Minister Viktor Orban and Warsaw under the right-wing government of the Law and Justice (PiS) party.

The Commission on Wednesday separately warned Hungary it risked being sued in court over a number of Orban’s policies.