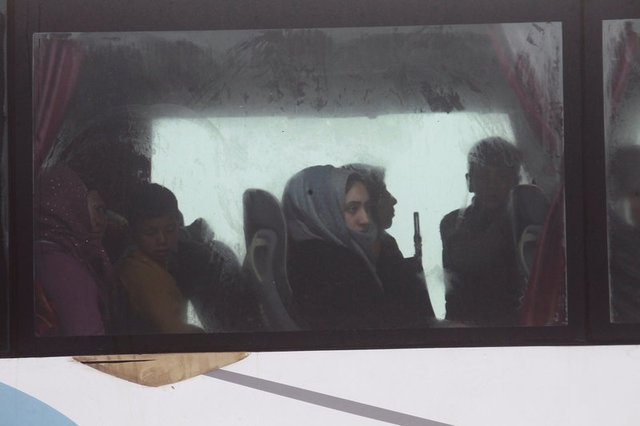 People evacuated from the two villages of Kefraya and al-Foua, after an agreement reached between rebels and Syria's army, ride a bus at insurgent-held al-Rashideen, Aleppo province, Syria April 14, 2017. REUTERS/Ammar Abdullah

Buses began evacuating hundreds of people from two rebel-besieged Shi’ite villages in north-west Syria on Friday and rebels began to leave two towns near Damascus with their families, under a deal between the government and insurgents.

After six years of fighting a civil war, with help from Russia and Shi’ite allies Iran and Lebanon’s Hezbollah, Damascus has negotiated the deals from a position of strength.

The opposition says the deals amount to forced demographic change and deliberate displacement of Assad’s enemies away from the main cities of western Syria.

Early on Friday, residents of the mostly Shi’ite villages of al-Foua and Kefraya, besieged by rebel forces in the insurgents’ northwestern Idlib province stronghold, left on dozens of buses, the British-based Syrian Observatory for Human Rights monitoring group said.

The buses headed for government-held areas of Aleppo, the Observatory said.

Meanwhile, buses carrying rebel fighters and their families left the government-besieged town of Madaya near Damascus and close to the Lebanese border, the Observatory and a pro-Damascus military media unit reported.

The evacuation of nearby Zabadani, another town surrounded by government forces and their allies, appeared to have been delayed. No buses had yet left the town, but that evacuation was expected to begin later on Friday.

The convoys from Madaya and Zabadani are to head for Idlib.

A member of one of the Shi’ite parties said 60 buses were moving through the town of al-Foua.

Some 5,000 people were being transported from the Shi’ite villages, the Observatory said.

A similar number of buses were leaving Madaya, the Observatory said.

Syria‘s population is mostly Sunni Muslim. Assad is from the Alawite religious minority, often considered an offshoot of Shi’ite Islam.

Israel-Gaza fighting rages as diplomacy yet to gain traction (Updated)