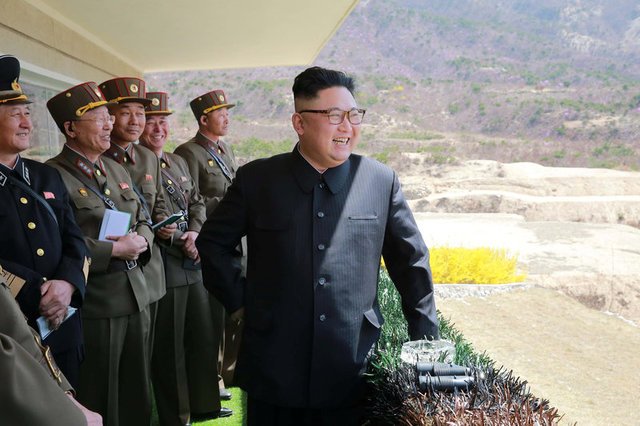 China said on Friday tension over North Korea had to be stopped from reaching an “irreversible and unmanageable stage” as a US aircraft carrier group steamed towards the region amid fears the North may conduct a sixth nuclear weapons test.

Concerns have grown since the US Navy fired 59 Tomahawk missiles at a Syrian airfield last week in response to a deadly gas attack, raising questions about US President Donald Trump’s plans for North Korea, which has conducted missile and nuclear tests in defiance of UN  and unilateral sanctions.

The United States has warned that a policy of “strategic patience” is over. U.S. Vice President Mike Pence travels to South Korea on Sunday on a long-planned 10-day trip to Asia.

China, North Korea‘s sole major ally and neighbour which nevertheless opposes its weapons programme, has called for talks leading to a peaceful resolution and the denuclearisation of the Korean peninsula.

“We call on all parties to refrain from provoking and threatening each other, whether in words or actions, and not let the situation get to an irreversible and unmanageable stage,” Chinese Foreign Minister Wang Yi told reporters in Beijing.

North Korea for its part denounced the United States for bringing “huge nuclear strategic assets” to the region.

A spokesman for the North Korean Foreign Ministry’s Institute for Disarmament and Peace issued a statement condemning the United States for its attack on the Syrian airfield.

“The US introduces into the Korean peninsula, the world’s biggest hotspot, huge nuclear strategic assets, seriously threatening peace and security of the peninsula and pushing the situation there to the brink of a war,” the North‘s KCNA news agency said on Friday, citing the statement.

“This has created a dangerous situation in which a thermo-nuclear war may break out any moment.”

North Korea, still technically at war with the South after their 1950-53 conflict ended in a truce, not a treaty, has on occasion conducted missile or nuclear tests to coincide with big political events and often threatens the United States, South Korea and Japan.

On Saturday, it marks the ‘Day of the Sun’, the 105th anniversary of the birth of state founder Kim Il Sung.

WITH OR WITHOUT YOU

While Trump has put North Korea on notice that he will not tolerate any more provocation, US officials have said his administration is focusing its strategy on tougher economic sanctions.

Trump said on Thursday North Korea was a problem that “will be taken care of” and he believed Chinese President Xi Jinping would “work very hard” to help resolve it.

Trump has also said the United States is prepared to tackle the crisis without China, if necessary.

He diverted the nuclear-powered USS Carl Vinson aircraft carrier and its strike group towards the Korean peninsula last weekend in a show of force.

The dollar fell on Friday against a basket of currencies, on track for a losing week as tension over North Korea underpinned the perceived safe-haven Japanese yen.

Media in Japan said the government confirmed it would take all precautions in the face of possible North Korean provocations.

The Nikkei business daily said government discussions included how to rescue the estimated 57,000 Japanese citizens in South Korea as well as how to cope with a possible flood of North Korean refugees coming to Japan, among whom might be North Korean spies and agents.

In Pyongyang, retired soldier Ho Song Chol told Reuters that North Korea would win should there be any conflict with the United States.

“We don’t think about other things, we just live in our belief that we will win as long as our Supreme Leader is with us,” Ho said, referring to Kim Jong Un.

Kang Gil-won, a 26-year-old graduate living in Seoul, said his biggest concern was not NorthKorea, but finding work in a tough job market.

“There’s no concern that war is going to break out tomorrow,” he told Reuters at a ‘study café’ where many young job seekers prepare for interviews.

“Getting a job is a war that I feel in my bones.”

Many South Koreans, meanwhile, marked ‘Black Day’ on Friday, but it had nothing to do with worry about North Korea.

Black Day is a day for singles, marked by eating ‘jajangmyeon’, a noodle dish topped with a thick sauce made of black beans. It’s celebrated by singles as a response to “White Day”, an Asian Valentine’s Day which falls a month earlier, on March 14.

Evacuation of rebels, villagers begins under swap deal in Syria