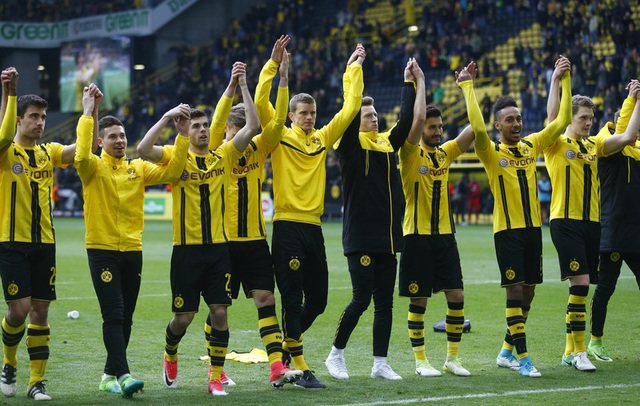 Borussia Dortmund bounced back from the trauma of the bomb attack on their team bus and their Champions League defeat in midweek to earn an emotion-filled 3-1 home win over Eintracht Frankfurt in the Bundesliga on Saturday.

Marco Reus, who struck with an audacious back heel after just two minutes, Sokratis Papastathopoulos and Pierre-Emerick Aubemayang were all on target after the Dortmund fans gave their players a rousing reception back at the Westfalenstadion.

Second-placed RB Leipzig made sure they will play in the Champions League for the first time next season after a handsome 4-0 win over Freiburg put them on to 61 points, seven clear of Hoffenheim.

Their cause was helped by defeat for fifth-placed Hertha Berlin who went down 1-0 at lowly Mainz.

A tumultuous week for Dortmund quickly took a turn for the better in the opening minutes of the game against Frankfurt.

Their opening goal came after a slick one-two with Aubameyang finding American teenager Christian Pulisic, who used his pace to catch Eintracht goalkeeper Lukas Hradecky in no man’s land. The American kept his composure to find Reus in front of goal for a stunning back-heeled finish on his return from a month out with injury.

Eintracht had two good chances before Mexican Marco Fabian equalised only for a right-footed shot from Papastathopoulos to restore Borussia’s lead 10 minutes before half-time.

Aubameyang grabbed his 26th Bundesliga goal of the season to seal success in the last five minutes.

The players had been greeted by a stirring reception from their supporters at a packed stadium with a visible extra police presence.

The players’ bus had been heading to their stadium for the Champions League match against Monaco on Tuesday when three explosions occurred, injuring Spanish defender Marc Bartra and delaying the match by a day.

Dortmund said on Twitter on Saturday that Bartra had been released from hospital.

Leipzig won for a 19th time this season in a one-sided triumph with goals from Yussuf Poulsen, Timo Werner, Naby Keita and Diego Demme.

Hoffenheim were 2-0 up after Adam Szalai’s double but Gladbach fought back to level at halftime. Two second-half goals from Kerem Demirbay kept up Hoffenheim’s unbeaten home record in a goal-filled extravaganza.

Victory for struggling FC Augsburg, Mainz and VfL Wolfsburg meant bottom side Darmstadt 98 will be relegated if they do not win on Sunday at home to Schalke 04.

An own goal from Hertha defender John Brooks kept Mainz just above the relegation places in the Bundesliga as they arrested a run of five successive defeats.