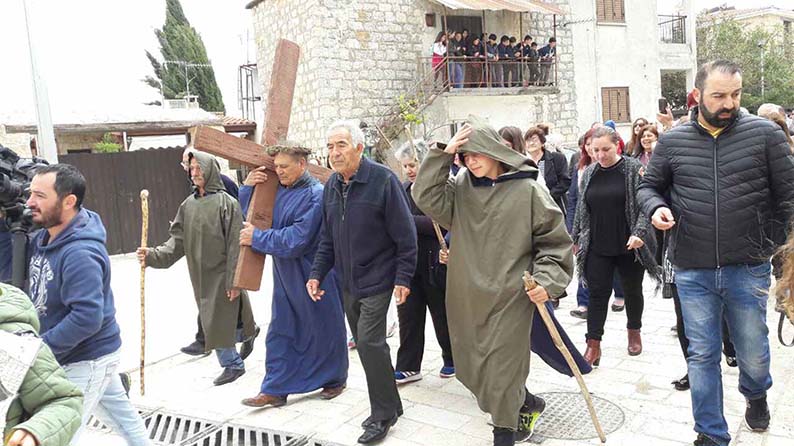 Residents and visitors gathered on Good Friday in Kathikas, in the Paphos district for the annual re-enactment of the Passion of the Christ. The cross was carried by the community leader, Menelaos Tourvas

THE Passion of Christ at Easter is nothing less than the institutionalised torture and killing of God incarnate by the Roman state instigated by religious zealots for daring to question their power.

But the Passion has also been of huge unconscious importance to the secular world of Christian Europe in intellectual and philosophical discourse since the Enlightenment.

The state in most European countries is secular but the majority of its people profess the Christian faith although many do not practice it overtly. People in Spain, Italy and Greece are more religious than in North Europe but few are fundamentalist. In Cyprus, the Greek Cypriots wear religion on their sleeve, particularly at Easter, in contrast to the Turkish Cypriots who are probably the most secular Muslim people on the planet –  courtesy of the secular Kemal Ataturk.

The belief in Jesus as God incarnate is hugely important in Christian teaching. It should also be important to secular people and those on the road back from Damascus. I do not speak as a practicing Christian but as someone who was brought up in a Christian culture.

I was christened Greek Orthodox by my mother in the way that many Greek mothers would have done.

I attended the American Academy in Larnaca, a missionary secondary school from the US Bible Belt, where, in those days, we were taught the Holy Bible and Christian ethics religiously every school day of the week.

I have not been in touch with any old students from my Academy days but I am sure none converted to Bible Belt Christianity. On the other side, none would have a bad word said against Jesus or his mother Mary.

I decided to do this piece under my Greek Orthodox identity out of respect for my late mother and her community and out of gratitude to Jesus Christ whose sermon on the mount has been a constant source of moral guidance.

In the last phase of his life, from the sermon on the mount until his crucifixion, Christ’s teachings were too civilised even for God Himself. At the American Academy, we were taught that the God of the Old Testament was a jealous God who punished disobedience harshly and made unreasonable demands of people.

Not God the son in Christ. The worst he could bring himself to say about his tormentors as he hung nailed to the cross was ‘forgive them Father for they know not what they do.’

As for Mary his mother, what can one say, except that if Jesus had asked her ‘let this cup pass from me,’ as the model mother that she was, she would have gently taken the cup herself. That is why the Theodokos – mother of God – is such a huge figure in the Orthodox and Roman Catholic world.

But for me the importance of Christ’s sojourn here on Earth, his torture and crucifixion, lies in its symbolism. The mystical importance of the Easter story is what Christians around the world will celebrate this weekend. The implications of God becoming human and suffering injustice, torture and a terrible death on the cross, will continue next week.

Christos Liasides is better known Alper Ali Riza QC. He is a barrister and part time judge in England.