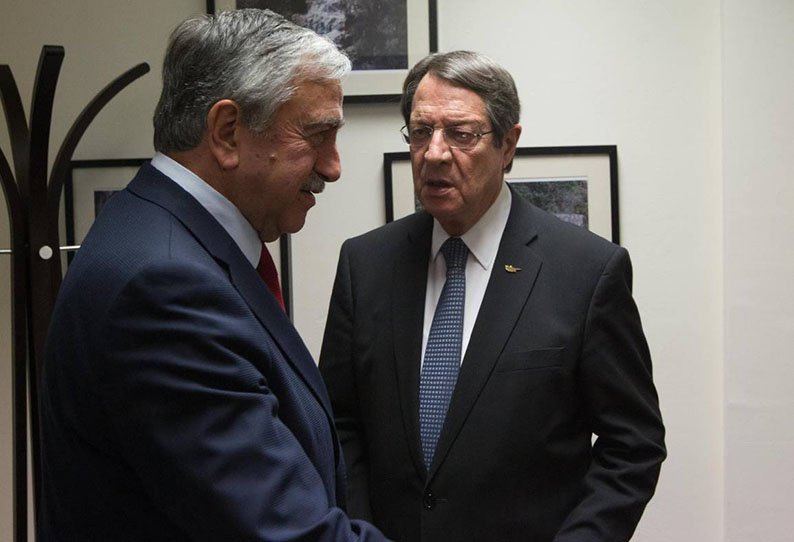 AFTER a two-month pause, negotiations proper for a Cyprus settlement resumed on Thursday with the leaders of the two communities discussing governance, the economy and EU matters amid the news that Turkey had issued a notice it would sending a survey vessel to the island’s exclusive economic zone.

It was the second face-to-face this month between Nicos Anastasiades and Mustafa Akinci, the previous one having dealt with procedural matters regarding the continuation of the talks.

It was also the first time the leaders were meeting after the constitutional referendum in Turkey.

It was hard to gauge whether any progress was made during the meeting. On returning to the presidential palace, a somewhat sullen-looking Anastasiades gave reporters a brief statement before retiring for the night.

“There was a good climate. Tonight we were briefed by our [respective] negotiators on their work to date, and their deliberations will continue tomorrow.

“Of course, the climate is not enough, what is most important is to get results. Differences do remain, and so I would not like to create an impression imparting either optimism or pessimism.”

Asked about recent Turkish moves in the region – holding live-ammo war drills and the announcement of new seismic surveys by Turkey within Cyprus’ Exclusive Economic Zone – Anastasiades said he raised the matter with Akinci.

“We cannot on the one hand talk about confidence-building measures and on the other hand have these Turkish provocations.”

Asked what was Akinci’s response, if any, the president declined comment.

During Thursday’s meeting the leaders were flanked by their respective top negotiators and lead advisors on Cyprus.

The three issues on the table – governance, the economy and EU affairs – had been discussed at length previously.

One item relating to economic aspect of reunification is the question of an asset quality control of banks in the north, as cited in a report by the International Monetary Fund. The Turkish Cypriot side had earlier refused to grant permission for such checks.

The talks are being held against a backdrop of reportedly chilled relations between the two leaders, following the debacle where the parliament in the south voted to introduce the commemoration in public schools of the 1950 ‘Enosis’ [union with Greece] referendum.

In the meantime, Turkey this week issued a Navtex, or notice to mariners, reserving parts of the island’s exclusive economic zone in order to conduct seismic surveys from April 30 to June 30. The reserved area also includes part of Cyprus’ offshore natural gas blocks.

The foreign ministry denounced the action, saying Cyprus reserves its right to react as it sees fit if the Turkish vessels do in fact conduct seismic surveys in the Republic’s EEZ.

Ankara’s move is seen as a response to new offshore gas exploration by Cyprus scheduled for June. Turkey disputes the Republic’s right to search for natural gas in certain areas and also says that Turkish Cypriots should also have a say in the affair.

Alluding to this, Akinci has previously said that July is the “natural end date” for the talks, irrespective of whether the Greek Cypriots are averse to timetables.

Akinci has repeatedly stated that negotiations cannot drag on.

Thursday’s meeting was initially scheduled for 6.30, but was delayed an hour due to a personal family matter for Akinci. It was reported that Akinci’s wife Meral had dislocated her shoulder after taking a tumble.

Hours before meeting with Anastasiades, Akinci said Greek Cypriots needed to change their mentality towards Turkish Cypriots if the talks were to succeed.

“Either we clinch an agreement and the ‘TRNC’ becomes part of a federal partnership state or, if we cannot, the ‘TRNC’ will continue on its own path.

“Our desire is for the former,” he added.