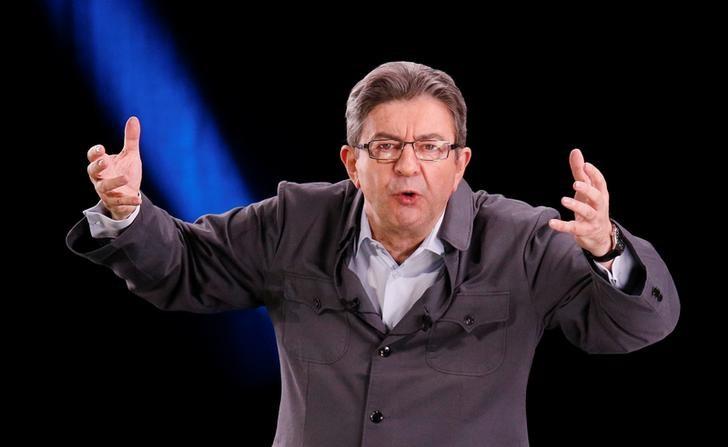 Hard-left presidential challenger Jean-Luc Melenchon and conservative Francois Fillon were neck-and-neck behind the frontrunners in an opinion poll on Thursday, as candidates made last-ditch appeals to undecided voters.

Voters will cast their ballots on Sunday in the first round of what has transformed into the most unpredictable French election in living memory, with four candidates within reach of the two places in a run-off a fortnight later.

Pollsters forecast the most likely outcome of the first round is that centrist Emmanuel Macron will go head-to-head against far-right leader Marine Le Pen in the May 7 second round. But the race to succeed the deeply unpopular socialist President Francois Hollande has tightened in recent weeks.

A Harris Interactive poll showed Melenchon, propelled from wildcard to genuine contender in part thanks to feisty television performances and smart social media campaign, was level with one-time favourite Fillon with 19 per cent of support.

That put the two men only three percentage points behind Le Pen – on 22 per cent – and trailing Macron, who consolidated his status as the frontrunner on 25 per cent.

Macron, a former banker who quit as economy minister last August to set up his independent “En Marche!” or “Onwards!” movement, would beat Le Pen or any other candidate in the run-off, the Harris poll showed.

That prediction is in line with other polls.

Fillon‘s ratings have gradually recovered after his campaign hit the rocks following nepotism allegations, and on Thursday he redoubled attempts to dissuade his core voters from straying to Macron’s camp.

Seizing on a foiled attack this week in which he and other candidates were seen as potential targets, the 63-year-old former prime minister sought to reinforce his credentials as a tough pair of hands on security.

“In the fight against militant Islam, like on everything else, Emmanuel Macron stance’s is blurry,” Fillon told Le Figaro newspaper, adding that as president he would take a much harder line with extremists.

Melenchon, meanwhile, in an interview with BFM TV, pressed his criticism of European Union institutions – a stance that has increasingly worried investors as his support has grown. He said France needed to use its influence to push through pro-growth reforms and renegotiate treaties.

“I want people to know, for all of Europe to hear clearly, that this needs to change or it’s not going to go on like this, it’s not possible,” Melenchon said.

His “plan B” should reform discussions fail, would be to put France’s exit from the EU to a referendum just as Britain did last summer.

The prospect of Melenchon or Le Pen, who wants to dump the euro currency and champions an even more strident anti-EU stance, or even both candidates making the run-off has put pressure on French bond yields.

French 10-year bond yields fell briefly to a three-month low earlier on Thursday, though, as polls showed some stability.

Turkey: Europe rights court has no jurisdiction over referendum

Help create a wall of kindness