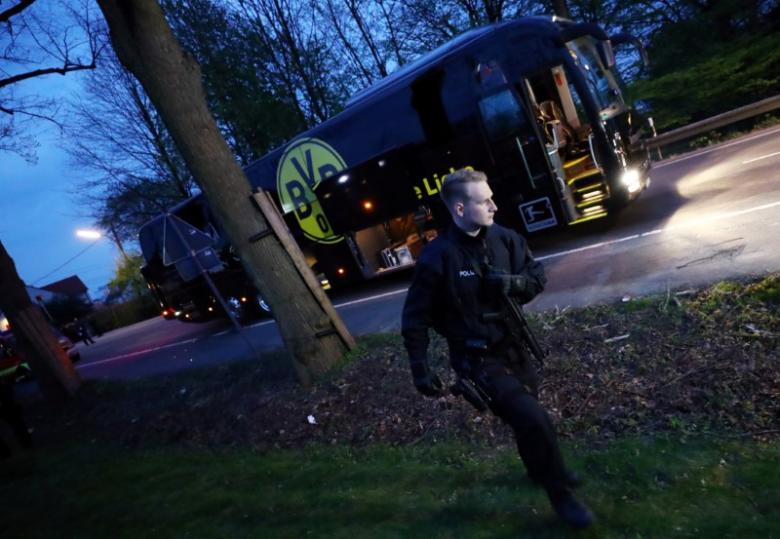 German police arrested a man on Friday suspected of detonating three bombs that targeted the Borussia Dortmund soccer team bus in the hope of sending the club’s shares plummeting and making a profit on an investment, prosecutors said.

In a statement, the federal chief prosecutor said the 28-year old man, a dual German and Russian national identified as Sergei V., had bought options on Borussia Dortmund’s stock before the attack.

The team bus was heading to the club’s stadium for a Champions League match against AS Monaco on April 11 when the explosions went off, wounding Spanish defender Marc Bartra and delaying the match by a day.

Prosecutors last week expressed doubts about the authenticity of three letters left at the site of the attack that suggested that Islamist militants had carried it out.

The prosecutor’s office said the suspect had bought 15,000 put options, or contracts giving him the right to sell Borussia Dortmund’s shares at a pre-determined price, on the day of the attack, using a consumer loan he had signed a week earlier.

“If the shares of Borussia Dortmund had fallen massively, the profit would have been several times the initial investment,” the prosecutor’s office said.

The serious injury or death of any of the soccer players could have resulted in such a slump, it said.

Shares in BVB rose 1.8 percent on April 12, the day after the attack, and are up about 2 percent so far this year.

Police detained the suspect in the city of Tuebingen in the south-western state of Baden Wuerttemberg. He faces charges of attempted murder, inflicting serious bodily harm and causing an explosion, the prosecutor’s office said.

In March, the suspect booked a room for April 9-13 in the same hotel where the Dortmund team players were staying for their home game against Monaco AS.

Prosecutors said the suspect had bought the Dortmund shares on the day of the attack using the IP address of l’Arrivee hotel, some 7 kilometres south of Dortmund’s stadium.

Security is a hot issue in campaigning for Germany‘s federal election on Sept. 24, in which Chancellor Angela Merkel is seeking a fourth term.

In December, a Tunisian man killed 12 people when he ploughed a truck through a Berlin Christmas market, one of a spate of Islamist militant attacks across France, Belgium andGermany in the past two years.

Last year, Merkel lost support to the anti-immigration Alternative for Germany (AfD) party after opening the country’s doors to more than a million migrants. The AfD has since seen its ratings fall while Merkel has regained some ground.