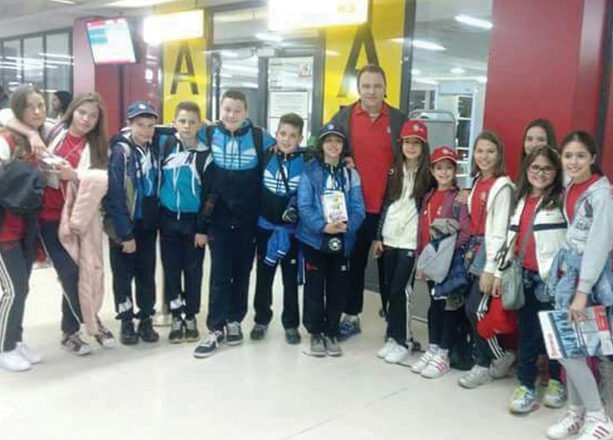 The group of Serbian kids said to have been sent packing

Forced to buy expensive airport food and water, given no shelter

A SERBIAN lawyer and human rights activist who lives permanently in Cyprus has contradicted the foreign ministry’s version of events relating to the handling of a Serbian children’s dance troupe on Tuesday, saying the authorities deported its members and did not provide suitable care to its underage performers.

“Authorities at Larnaca airport detained the members of the KUD Izvor folklore ensemble, did not provide them essential care, such as food, water and shelter for 24 hours, and applied “an identical process to that used in extradition cases,” Liliana Tatic said in an interview.

The 17 members of the ensemble, comprised of Dejan Tosic, head of the group, three adult chaperones, and 13 children, arrived on Monday, April 17, at 3.10 am from Belgrade and were denied entry into Cyprus, Tatic said.

“The reason? Because they were going to travel to the occupied area of Cyprus to perform in a Turkish Cypriot organised festival devoted to the Children of the World,” she said.

Upon arrival, they all had to hand over their passports to Cypriot authorities. The ensemble had to remain in the airport’s arrivals area where they had to pay extortionate prices to buy food and water.

“If parents in Cyprus treated their child so, they would face prosecution for cruelty and neglect,” Tatic added.

Tosic had to pay €97 to buy sandwiches for the group and had to also buy water for them.

According to the official account given by the foreign ministry on Tuesday, and by permanent secretary Alexandros Zenon the following day, the members of the group had not been denied entry to or deported from Cyprus.

Instead, they were merely advised that crossing over to the north would violate United Nations resolutions, and that no consular assistance would be available to them while there.

Zenon said that the group decided to depart for Serbia after they were informed of the risks.

“(The) explanations of the Cypriot foreign ministry appear to be flawed and untrue,” Tatic said, adding that Cypriot authorities issued a “refusal of entry at the border” form.

The form issued by authorities for Milica Spasovski, who turns 12 in September, said that she had “no appropriate documentation justifying the purpose and condition of stay”.

“Milica, who had been working hard for the last two-and-a-half months to perfect a dance routine which she had hoped to perform in public, was refused permission to enter the country,” Tatic said.

The girl and 13 other members of the ensemble were flown back to Serbia on Tuesday by two Air Pink passenger planes, Tatic said. Tosic, the ensemble’s leader, his wife and a child of the troupe who got no seat on the special flights (Air Pink operates aircraft with a capacity of 7 or 8 passengers) arrived in Serbia at 4:30 am on Wednesday after spending all the time at the airport.

The three were then escorted “by police to the departure gate when they left,” just like in the case of released criminals who are extradited, Tatic said.

The adventurous trip of the ensemble has made headlines in Serbia, from where Cyprus attracted 11,296 tourists last year.

May refuses to rule out personal tax hikes after election

Bekele in a hurry for London marathon glory