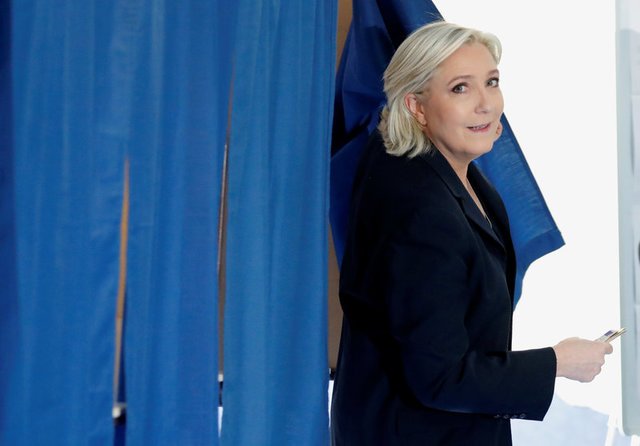 France voted on Sunday in the first round of a bitterly fought presidential election that could define the future of the European Union, and is sure to be seen as a gauge of the anti-establishment anger that has brought upsets in Western politics.

Over 50,000 police and 7,000 soldiers backed by rapid response units patrolled streets three days after a suspected Islamist gunman shot dead a policeman and wounded two others in the heart of the capital, Paris.

Voters will decide whether to back a pro-EU centrist newcomer, a scandal-ridden veteran conservative who wants to slash public expenditure, a far-left eurosceptic admirer of Fidel Castro, or a far-right nationalist who, as France’s first woman president, would shut borders and ditch the euro.

The last polling stations were due to close at 8 p.m. (1800 GMT), and projections were likely to be give early pointers to the outcome soon after.

The outcome will show whether the populist tide that saw Britain vote to leave the EU and Donald Trump elected president of the United States is still rising, or starting to ebb.

But it also provides a choice between radically different recipes for reviving a listless economy that lags its neighbours, and where almost a quarter of under-25s have no job.

A high level of indecision added to the nervousness.

Hanan Fanidi, a 33-year-old financial project manager, was still unsure as she arrived at a polling station in Paris’s 18th arrondissement.

“I don’t believe in anyone, actually. I haven’t arrived at any candidate in particular who could advance things,” she said. “I’m very, very pessimistic.”

Despite fears that broad disillusionment with politics could keep voters away, pollsters estimated that the turnout, in fair weather nationwide, would be broadly in line with the last election five years ago, at around 80 percent.

Emmanuel Macron, 39, a centrist ex-banker who set up his party just a year ago, is the opinion polls’ favourite to win the first round and then beat far-right National Front leader Marine Le Pen in the two-person runoff on May 7.

If they come first and second on Sunday, it would virtually reinvent a political landscape dominated for 60 years by mainstream groupings from the centre-left and centre-right.

“It wouldn’t be the classic left-versus-right divide but two views of the world clashing,” said Ifop pollsters’ Jerome Fourquet. “Macron bills himself as the progressive versus conservatives, Le Pen as the patriot versus the globalists.”

While Macron offers a vision of gradual economic deregulation that would cause few ripples on global financial markets, Le Pen proposes a more disruptive programme of higher social spending, financed by money-printing, coupled with a withdrawal from the euro and possibly the EU.

Of the two other candidates close enough in opinion polls to be in with a good chance of making the runoff, Jean-Luc Melenchon offers a far-left tax-and-spend platform that has much in common with Le Pen’s, although without her plans to restrict immigration.

And conservative Francois Fillon, rebounding after being plagued for months by a fake jobs scandal, promises economic shock therapy of deregulation and slashing taxes and state spending, cutting half a million state sector jobs.

The seven other candidates, including the ruling Socialist party’s Benoit Hamon, lag far behind.

In a polling station in Lyon, long-time left-wing voter Julien Rossi, 42, said he had been won over by Macron. “We’re from the same generation. He goes down well abroad. He’s the most open of the candidates.”

Some surveys have been predicting a turnout closer to the 70 percent that took the National Front’s then-leader, Jean-Marie Le Pen, into the second round in 2002. Pollsters are unclear whether a high turnout would favour his daughter in 2017.

Pollsters say jobs, the economy and and the general trustworthiness of politicians are voters’ main concerns.

But security has re-entered the debate since Thursday’s killing of a policeman on the Avenue des Champs-Elysees, and the arrest in Marseille on Tuesday of two men suspected of planning an imminent Islamist attack.

Le Pen has emphasised the Islamist threat and promised tougher border controls, and some argue that the incident increases her chances. But previous attacks, such as the killing of 130 people in Paris by Islamist gunmen in November 2015 ahead of regional polls, have not appeared to affect voting.

One polling station in Besancon, in eastern France, was evacuated on Sunday after a stolen vehicle was abandoned nearby with the engine running.

The possibility of a Le Pen-Melenchon run-off is not the most likely scenario but is one that alarms bankers and investors.

While Macron wants to further beef up the euro zone, Le Pen has told supporters “the EU will die”. She wants to return to the Franc, re-denominate the country’s debt stock, tax imports and reject international treaties.

Melenchon also wants to radically overhaul the European Union and hold a referendum on whether to leave the bloc.

Both would struggle, in parliamentary elections in June, to win a majority to carry out such radical moves, but their growing popularity also worries France’s EU partners.

“It is no secret that we will not be cheering madly should Sunday’s result produce a second round between Le Pen and Melenchon,” German Finance Minister Wolfgang Schaeuble said.