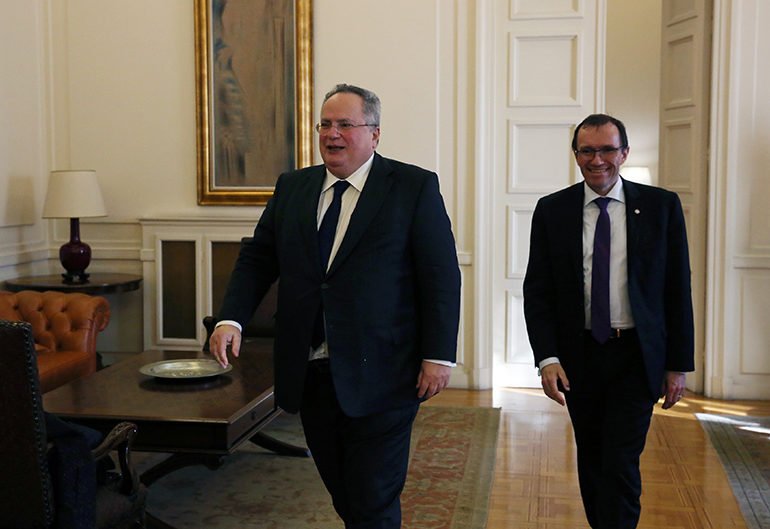 The government said on Sunday there was nothing in Nicos Kotzias critical letter to UN Secretary-General Antonio Gutteres about Special Adviser Espen Barth Eide, that the Greek foreign minister had not said publicly during his recent visit to Cyprus but conceded that not everything Eide did was satisfactory for the Greek Cypriot side.

It emerged on Sunday that Kotzias had written a letter to UN Secretary-General Antonio Guterres to complain about Eide’s “conduct” .

According to Phileleftheros “the letter bluntly stated” that the UN official was acting to promote the Turkish request for the EU four freedoms to be applied to Turkish citizens in the event of a Cyprus solution. The letter is dated April 7, the newspaper said.

It reportedly accuses Eide of lobbying for the Turkish side and instead of acting like a UN mediator, he was giving them legal guidance on how best to formulate their demands to the EU.

Kotzias explained to the UN chief that Turkey and the Turkish Cypriot side were posing obstacles ahead of discussions on key issues such as guarantees and the withdrawal of Turkish troops. The issue of the four freedoms was being framed, not in the interests of a Cyprus solution but was related to Turkey-EU relations, the report said.

Eide, Kotzias added, was exceeding his mandate by acting in favour of the Turkish side. The letter states that Eide was advising the Turkish side in a legal sense on how it could promote its demands.

Speaking to Cybc at an event in Kyperounda, government spokesman Nicos Christodoulides said there were some behaviors and actions by Eide that the Greek Cypriot side were not in agreement with and which “did not satisfy us.”

“What is important to note, considering that is the 27th special adviser of the secretary-general, is that there has never been a special adviser that has completely satisfied either one side or the other,” Christodoulides said, adding that special advisers have a clear mandate and if they move outside of that there were steps that could be taken.

“Beyond that it is important not to repeat past mistakes, such as in 2004 when with our own consent the special adviser at the time was given an enhanced role. This will not be repeated,” the spokesman said.

He was referring to the Annan plan in 2004 when the UN stepped in at the last minute to bridge gaps between the sides, which led to accusations of interference that ultimately helped lead to the rejection of the plan by Greek Cypriots in referendum 13 years ago Monday.

Asked if the talks would be affected by this development and others that might force a new impasse, the spokesman said: “I will not talk about dead ends. We are in a process. We are doing what we can from our side to see results. Nobody wants more than us for this process to succeed,” Christodoulides said.

“At the same time, there are indeed problems and difficulties arising from the attitudes and behaviours of Turkey, especially after Geneva… promoting positions that are beyond the specified framework and convergences that were reached,” he added, referring to the issue of the four freedoms.

“I repeat that from our side we will do everything possible in order to have effective outcome.”

Asked what the National Council would discuss on Monday, Christodoulides said the resumption of the talks, the outcome of the referendum in Turkey, as well as Turkey’s actions in recent days. The latter was a reference to Ankara sending a seismic survey ship to operate in Cyprus’ exclusive economic zone, which the government says is aimed at creating impressions in the region that would damage Cyprus’ energy plans and the island’s tourism.

“It is not declarations, announcements and posts on social media that will ensure the rights of the Republic. It is through very specific actions on the part of the government, that the executive has already set in motion,” the spokesman said.

The Green Party on Sunday responded to the Kotzias report saying it had many time asked for Eide to be replaced but that President Nicos Anastasiades had “not only tolerated him but in many cases had supported” the UN envoy.

“The letter from Mr Kotzias to the UN Secretary-General leaves the president exposed once again,” the Greens said.

“The ‘Greek foreign minister clearly denounces the special adviser of the United Nations in Cyprus who exceeds his terms of reference and operates in favor of the Turkish side on the issue of the four freedoms. This letter should have been sent long ago by President Anastasiades and not Mr Kotzias.”

Diko said in a statement that the letter was “fully justified” and that Kotzias confirmed the view of the party that Eide had exceeded his mandate on an number of occasions and had acted as “a bearer and supporter of Turkish positions, both in the European Union and elsewhere”.

“We invite President Anastasiades to take a clear stance on this issue and support the action of the Greek foreign minister,” the party said.

A piece of sky will fly in theatres