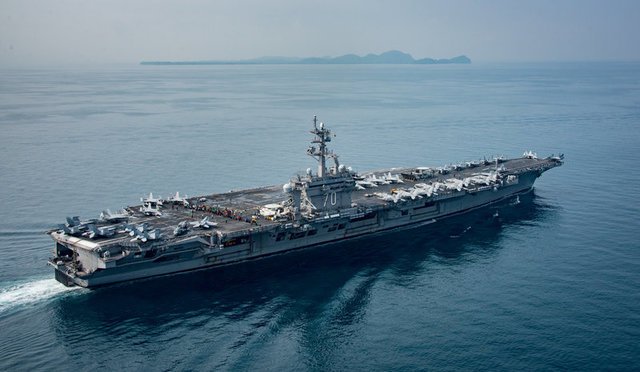 Chinese President Xi Jinping called for all sides to exercise restraint on Monday in a call with U.S. President Donald Trump, as a nervous South Korea and Japan sought to join drills with a U.S. aircraft carrier strike group headed for Korean waters.

Reclusive North Korea said at the weekend it was ready to sink the U.S. aircraft carrier, the USS Carl Vinson, which Trump had ordered to waters off the Korean peninsula as a warning to the nuclear-armed North.

Japan said on Sunday it had sent two Japanese destroyers to join the carrier group for drills, and South Korea said it was also in talks about holding joint naval exercises.

China is increasingly worried the situation may spin out of control, leading to war and a chaotic collapse of its isolated and poverty-struck neighbour.

China “hopes that all relevant sides exercise restraint, and avoid doing anything to worsen the tense situation on the peninsula”, the statement paraphrased Xi as saying.

The nuclear issue can only be resolved quickly with all relevant countries pulling in the same direction, and China is willing to work with all parties, including the United States, to ensure peace, Xi said.

Tensions have risen sharply in recent months, with Washington and its allies fearing Pyongyang could conduct another nuclear missile test or launch more ballistic missiles in defiance of United Nations sanctions.

North Korea celebrates the 85th anniversary of the foundation of its Korean People’s Army on Tuesday, and has marked similar events in the past with nuclear tests or missile launches.

“We agreed to strongly demand that North Korea, which is repeating its provocation, show restraint,” Abe told reporters.

“We will maintain close contact with the United States, keep a high level of vigilance and respond firmly,” he said.

Abe also said he and Trump agreed that China, North Korea’s sole major ally, should play a large role in dealing with Pyongyang.

A Japanese official said the phone call between Trump and Abe was not prompted by any specific change in the situation.

The U.S. government has not specified where the carrier strike group is, but U.S. Vice President Mike Pence said on Saturday it would arrive “within days”.

South Korean Defence Ministry spokesman Moon Sang-gyun gave no further details about the South’s plans, other than saying Seoul was holding discussions with the U.S. Navy.

“I can say the South Korean and U.S. militaries are fully ready for North Korea’s nuclear test,” Moon said.

South Korean and U.S. officials have feared for some time that North Korea could soon carry out its sixth nuclear test.

However, the group said it was unclear whether the site was in a “tactical pause” before another test or was carrying out normal operations.

Adding to the heightened tensions, North Korea detained a U.S. citizen on Saturday as he attempted to leave the country.