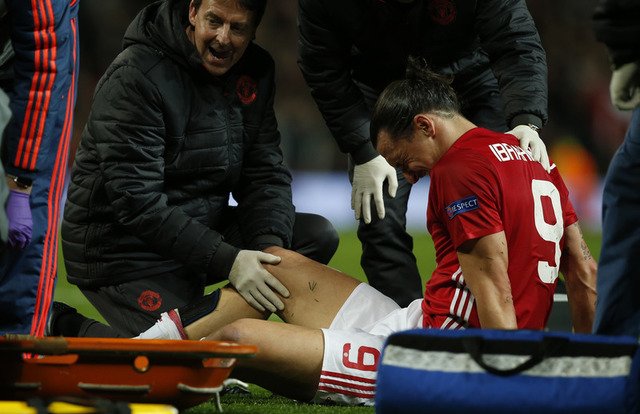 Manchester United striker Zlatan Ibrahimovic has vowed to come back even stronger after suffering a serious knee injury against Anderlecht in the Europa League last week.

Ibrahimovic and defender Marcos Rojo are likely to miss the rest of the season after scans revealed they both have suffered cruciate knee ligament injuries.

“First of all, thank you for all the support and love,” Ibrahimovic, United’s top scorer this season with 28 goals, wrote on his Instagram account on Sunday.

“It’s no news I got injured so I will be out of football for a while. I will go through this like everything else and come back even stronger. So far I played with one leg so it shouldn’t be any problem.”

The 35-year-old Swede, whose contract at Old Trafford expires at the end of the season, said injuries will not decide his future in the game.

“One thing is for sure, I decide when it’s time to stop and nothing else. Giving up is not an option,” he added.

United, who are fifth in the Premier League standings, face a challenging schedule including visits to Manchester City, Arsenal and Tottenham Hotspur.

They also face Spanish side Celta Vigo in a two-legged Europa League semi-final next month.