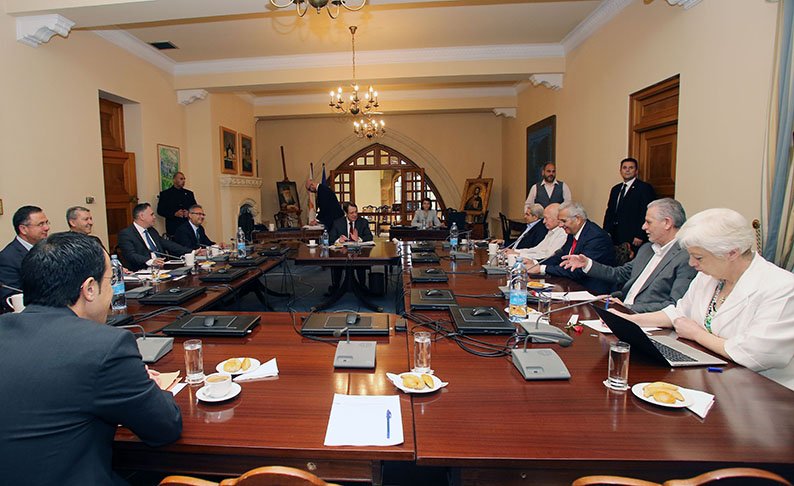 Reunification talks are currently going through a rough patch, but the Greek Cypriot side is ready and willing to press on to agree a settlement, the government said on Monday.

“Just as there have been convergences and progress in the past, at this moment we are facing certain difficulties, which Turkey has brought about with demands it raised in the wake of the Geneva conference,” deputy government spokesman Victoras Papadopoulos said.

He was speaking to reporters after a session of the National Council, where President Nicos Anastasiades briefed political party leaders on the state of play in the Cyprus settlement efforts.

“These are difficulties which must be overcome. Our side has all the good will, all the political will, and will try with all the means at its disposal to push the dialogue forward so that progress may be achieved.”

Also discussed at the National Council were the latest Turkish provocations. Ankara last week issued a notice to mariners, or Navtex, reserving an area inside the island’s exclusive economic zone (EEZ), off Famagusta, to carry out seismic surveys between April 30 and June 30.

Asked what, if any, steps the Republic has taken in response to the Turkish moves, Papadopoulos was not specific but said that “many things have been done and will continue to be done depending on developments.

“That is why we urge for patience and for unity to deal with these provocations, and you will see the reactions of the government as time goes by and [if] there is an increase in provocations.”

The National Council would be meeting again shortly to continue discussions, he added.

In comments to the press, party leaders signalled their concern with the trajectory of the talks.

Akel’s Andros Kyprianou said it appeared the negotiations were heading for “a dead end”.

Playing the blame game at this time should be avoided, he added.

Edek leader Marinos Sizopoulos – whose party is opposed to a bizonal, bicommunal federation as the model for a solution – said that recent developments have belied those who had expected Turkish President Tayyip Erdogan to change tack on Cyprus after the April 16 constitutional referendum in Turkey.

Giorgos Lillikas of the Citizens Alliance called for a new National Council session to discuss at length Turkish policy after the constitutional referendum.

A new meeting of the advisory body would likely be held before May 17, he said.

For his part, ruling Disy’s Averof Neophytou did not speak to the media. But in a tweet later, he posted: “We need to be calm and sensible, we need an objective analysis. The course of the Cyprus problem does not depend on us alone. We are not the only players.”

Peace talks broke off back in February when parliament in the south voted to introduce an annual commemoration in public schools of the January 1950 ‘Enosis’ (union with Greece) referendum. The Turkish Cypriot side eventually agreed to resume negotiations.

Earlier this month, Turkey reserved parts of the Cyprus EEZ for seismic surveys, and has been conducting military drills within the Nicosia Flight Information Region (FIR). New war games are scheduled west of Paphos for later this week.

Military sources told the Cyprus Mail that reserving part of the EEZ is in itself not a violation of Cyprus’ sovereignty, unless Turkey carries out economic activities in the reserved area.

This might include deploying a streamer (or seismic cable) for depth sounding.

In order to carry out any economic activity, Turkey must ask permission from the jurisdictional coastal state (Cyprus).

Ankara does not recognise the Republic of Cyprus.

However, the latest Turkish Navtex also includes part of Cyprus’ territorial waters – a clear violation of the Republic’s sovereign rights.