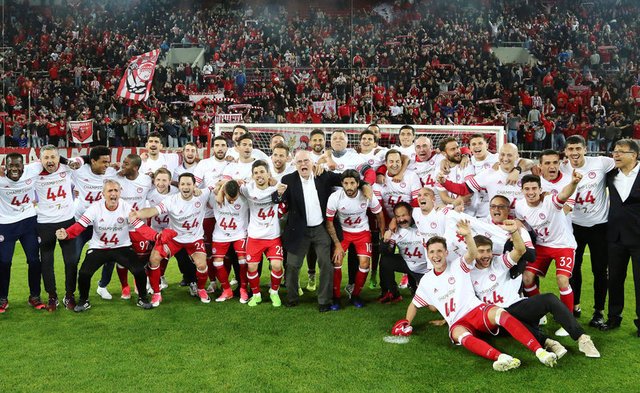 Olympiakos Piraeus clinched their seventh consecutive Greek league title and 44th in total after enjoying a comfortable 5-0 home win over struggling PAS Giannina in their penultimate match of the Super League season on Sunday.

The three-point haul means the Piraeus club now have an unassailable six-point lead with one match to go.

“It has been a strange season but in the end we’re the champions and that’s what matters,” Olympiakos coach Takis Lemonis told reporters.

The title is Lemonis’s fifth in his third spell at the helm after the 57-year-old former Olympiakos player was brought in on a short-term contract until the end of the season following the sacking of Portuguese Paulo Bento.

Lemonis said the lack of stability and constant changing of coaches had been difficult for the players.

“I am the fifth different technician and this is a big problem, especially for the team. I have had little time with them but if I managed to change something maybe it was the atmosphere in the dressing room and we managed to hold on to the title — now we have to try and win the Greek Cup as well.”

Despite a late-season dip in form which saw PAOK and Panionios threaten to catch Olympiakos, the Piraeus giants still managed to hold on after having built up a significant lead thanks to their imperious form during the first two-thirds of the campaign.

The home side went into the game at the Georgios Karaiskakis needing just a single point to wrap up another title but in the end an eight-minute goal blitz in the first half settled any nerves, with the strikes from Marin (21), Da Costa (24) and De la Bella (29) coming during a period of total dominance from the hosts.

De la Bella (71) and Domingeuz (82) from the penalty spot put the icing on the cake with two further goals much to the delight of the jubilant home fans.

There could yet be a late twist in the tale of the title race, however, as Olympiakos face a disciplinary hearing on Tuesday which could see them get a six-point deduction following trouble at the end of their Greek Cup semi-final first-leg loss against AEK Athens 11 days ago.