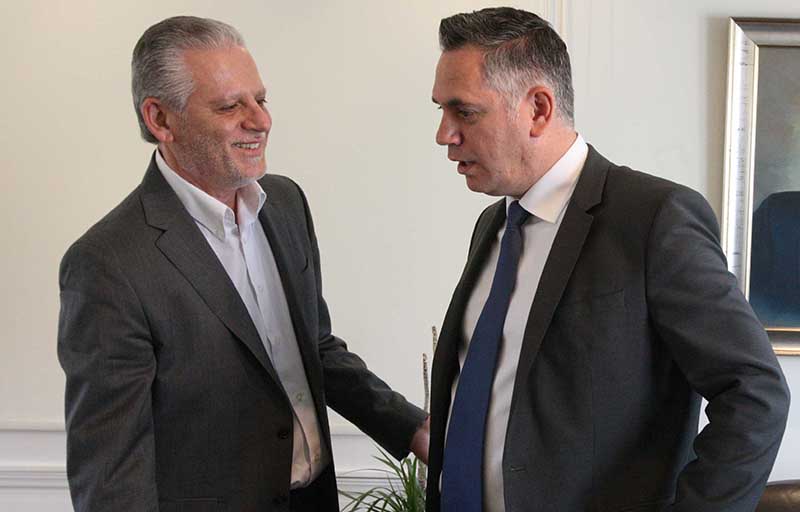 Marinos Sizopoulos and Nicolas Papadopoulos. Their parties are submitting amendments beyond the set date

In a statement, Diomidous, who is hoping to unseat Sizopoulos in elections scheduled for May 7, said his move to announce Edek’s backing of Papadopoulos shows “contempt and disrespect” to senior officials, members and even the party’s history.

He added that Sizopoulos is relegating Edek to the back seat and added that a month ago when he had asked Edek’s leader whether he had “agreed to back Papadopoulos” in “meetings behind the curtains”, he was “ridiculed, slandered, and defamed”.

“The ensuing events confirmed the secret meetings and the personal agendas,” Diomidous said.

“We found out from the media that Mr Sizopoulos presented at the meeting of the centre parties on Monday an Edek-commissioned poll for the presidential elections. Such a poll has never been presented to Edek’s party organs, nor were its findings discussed.”

Noting that he doesn’t exclude any presidential candidacy, Diomidous said final say should rest with Edek’s base.
“I believe that Edek – with all due respect to the other four parties – is the most historic party, and it cannot be relegated or be taken for granted by anyone,” he said.

Edek, he added, should be contributing to a sincere dialogue with its own proposals for the cooperation of all five centre parties.

“This is my proposal, which I have tabled at the political bureau, and if Edek’s members honour me with their vote on May 7, it is the way I plan to follow,” he said.

“We made it clear that all three potential candidates fulfilled the criteria to win our support, so it all boiled down to who was the most electable,” Sizopoulos said, referring to presidential hopefuls Papadopoulos, Solidarity leader Eleni Theocharous and the Citizens’ Alliance Yiorgos Lillikas.

Theocharous announced her withdrawal from the race in deference to Papadopoulos’ bid while Lillikas seems to be insisting on his own candidacy.

“Based on three separate polls by three different companies, it became evident that Mr Papadopoulos’ lead was substantial and decisive,” Sizopoulos said.

“There were three polls conducted from March 17 to April 6, and all delivered the same verdict. In every scenario and in all questions, Mr Papadopoulos’ lead [over Lillikas and Theocharous] was obvious.”

Commenting on challenger Diomidous’ protest, Sizopoulos was dismissive, arguing he was authorised to make the decision by the political bureau.

“Mr Diomidous can say whatever he likes,” Edek’s leader said.

“I honestly regret that, while Mr Diomidous is present at the political bureau meetings, he doesn’t seem to understand its decisions.”

Farmers call to use forks to resist monopolies

Public spend too much on health care says minister