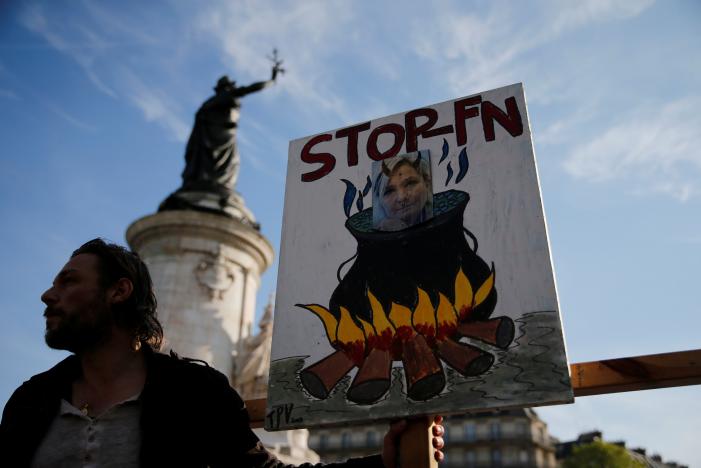 France‘s outgoing president, Francois Hollande, on Monday urged people to back centrist Emmanuel Macron in a vote to choose his successor next month and reject far-right leader Marine Le Pen, whose place in the run-off represented a “risk” forFrance.

Macron and Le Pen, leader of the National Front (FN), go head-to-head on May 7 after taking the top two places in Sunday’s first round.

Opinion polls indicate that the business-friendly Macron, who has never held elected office, will take at least 61 percent of the vote against Le Pen after two defeated rivals pledged to back him to thwart her eurosceptic, anti-immigrant platform.

Hollande, a Socialist nearing the end of five years of unpopular rule, threw his weight behind his former economy minister in a televised address, saying Le Pen’s policies were divisive and stigmatised sections of the population.

“The presence of the far right in the second round is a risk for the country,” he said. “What is at stake is France‘s make-up, its unity, its membership of Europe and its place in the world.”

Global markets reacted with relief to Sunday’s vote, which broke the dominance of established parties of the centre-left and centre-right but still left the most market-friendly and internationally minded of the remaining contenders in pole position to become France‘s next leader.

Surveys pointing to a clear Macron victory soothed investors who have been unnerved by Le Pen’s pledges to ditch the euro, print money and possibly quit the EU. Many had feared another anti-establishment shock to follow Britain’s Brexit vote and Donald Trump’s election as US president.

Le Pen said late on Monday she was taking “a leave of absence” from leading the FN to focus on campaigning, in a move that appeared to be a mere formality that changes nothing in her campaign platform.

She told France 2 television: “I will feel more free and above all, above party politics, which I think is important.”

Le Pen has said for months she is not, strictly speaking, an FN candidate but a candidate backed by the FN. She has long distanced herself from her maverick father Jean-Marie, the former FN leader, and in the election campaign has put neither her party’s name nor its trademark flame logo on her posters.

Opening the battle for second-round votes, Le Pen highlighted the continuing threat of Islamist militancy, which has claimed more than 230 lives in France since 2015, saying the 39-year-old Macron was “to say the least, weak” on the issue.

She also said she wanted to talk to sovereignist Nicolas Dupont-Aignan, who won nearly five percent of the first-round vote and has not said which side he would take in the next.

“His platform is extremely close to ours. Patriots should come together to fight those who promote unbridled globalisation,” she said.

Le Pen has promised to suspend the EU’s open-border agreement on France‘s frontiers and expel foreigners who are on the watch lists of intelligence services.

Macron’s internal security programme calls for 10,000 more police officers, and 15,000 new prison places, and he has recruited a number of security experts to his entourage.

However, opinion polls over the course of the campaign have consistently found voters were more concerned about the economy and the trustworthiness of politicians.

Le Pen’s campaign took aim on Monday at what they see as further weak spots: Macron’s previous job as an investment banker and his role as a deregulating economy minister under Hollande.

Analysts say Le Pen’s best chance of overhauling Macron’s lead in the polls is to paint him as a part of an elite aloof from ordinary French people and their problems.

Philippot called Macron “arrogant” and said his victory speech on Sunday had shown disdain for the French people by making it appear as though the presidency was already won.

In that speech, Macron appeared to respond to Le Pen’s claim to be the protector of France‘s workers and their values by saying: “I want to be the president of patriots in the face of a threat from nationalists.”

Le Pen needs to avoid a repetition of 2002, when her father, FN founder Jean-Marie Le Pen, surprisingly made the second round, but was then humiliated by right-wing president Jacques Chirac as mainstream parties united to block a party they considered racist and anti-Semitic.

His daughter has done much to soften the FN’s image, gathering support especially among young people – a quarter of whom are unemployed – with her promises to push back against “rampant globalisation”.

Still, two defeated candidates – conservative Francois Fillon and Socialist Benoit Hamon – did not even wait for Sunday’s count to urge their supporters to rally behind Macron, who took 23.74 per cent of votes on Sunday to Le Pen’s 21.53.

A Harris survey saw Macron going on to win the run-off against her by 64 per cent to 36. An Ipsos/Sopra Steria poll gave a similar result while a new poll by Opinionway on Monday put the margin at 61 per cent to 39 per cent.

Whichever candidate wins on May 7 will need to try to build a majority six weeks later in a parliament where the FN has only two seats and Macron’s year-old En Marche! (Onwards!) movement has none.

Macron has already enlisted some 50 sitting Socialist lawmakers to his cause, as well as a number of centrist party grandees.

Manuel Valls, a former Socialist prime minister on the right wing of the party who broke with the far-left Hamon’s campaign after failing to beat him for the party ticket, said on Monday he would be ready to work with Macron.

“We must help him (Macron) as much as we can to ensure Le Pen is kept as low as possible,” Valls told France Inter radio.

Sunday’s outcome was a huge defeat for the two centre-right and centre-left groupings that have dominated French politics for 60 years.

Conservative Francois Fillon, who had been the favourite to win the election before allegations emerged that he had paid his wife and two children from the public purse for work they did not do, came third with less than 20 per cent. He said on Monday that he would not be at the forefront of his party’s parliamentary campaign.

Hamon got only a third of the 19.5 per cent secured by the maverick former Trotskyist Jean-Luc Melenchon, emphasising the disarray of the French Left after five years of Hollande.

Serena fires back at Nastase for ‘racist’ comments

The thorny road to food security