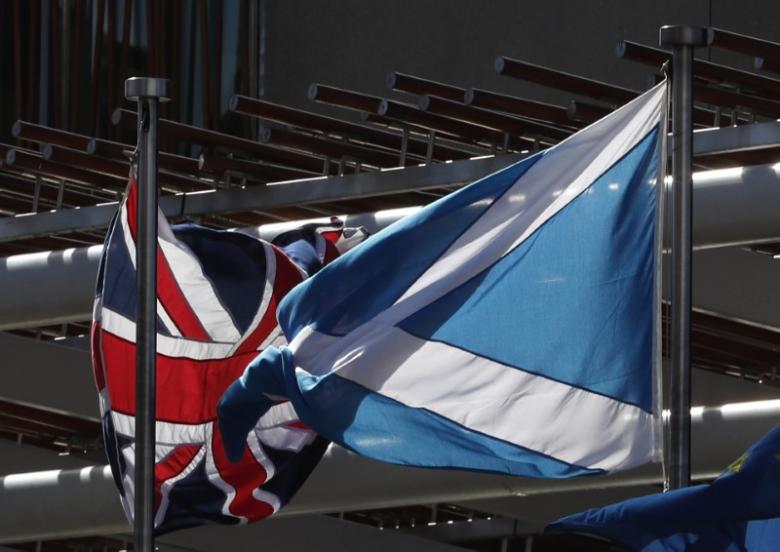 The Union flag and The Scottish Saltire fly at the Scottish Parliament ahead of a referendum debate in Edinburgh Scotland, Britain March 21, 2017

Most Scottish voters do not want another referendum on independence from the United Kingdom and support for secession itself appears to have weakened, according to a Kantar survey.

Scots voted by a wide margin to stick with the European Union in last June’s referendum, clashing with the UK as a whole which voted to leave.

Scotland’s devolved government, run by the Scottish National Party (SNP), says this means the country should be given a new chance to decide whether it wants to split from the UK. The central government in London opposes this.

The Brexit issue does not appear to have given wings to the independence movement, according to Kantar’s survey of 1,060 adults carried out after Scotland’s First Minister Nicola Sturgeon called for a referendum to be held in autumn 2018 or spring 2019.

The issue is centre-stage in Scotland ahead of a UK-wide election on June 8.

Other recent opinion surveys in Scotland have suggested pro- and anti-independence sentiment remained at similar levels to the 2014 referendum result.

Independence would shatter more than 300 years of economic and political ties between England and Scotland.

Tom Costley, head of Kantar in Scotland, suggested several possible reasons for the apparent weakening in pro-independence sentiment, including media criticism of the SNP’s performance in other areas such as health and education.

“The changing economic outlook in Scotland, particularly in relation to the oil industry, may also have led to voters reassessing independence,” he said.

“Moreover, with (British Prime Minister) Theresa May calling a General Election for 8th June, there is the potential for election fatigue with the prospect of an extended referendum campaign too much for the Scottish electorate”.

Several polls have given May’s Conservatives a huge UK-wide lead over the opposition. In Scotland, the SNP is expected to remain dominant but the Scottish Conservatives could dent the nationalists’ position.

Tom Hardy made a citizen’s arrest in London

Serena fires back at Nastase for ‘racist’ comments