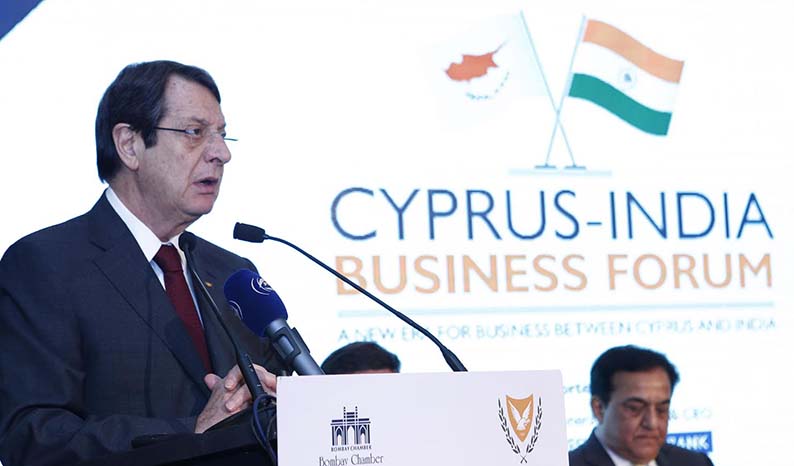 President Nicos Anastasiades on Wednesday encouraged Indian investors, to look towards projects in Cyprus in an address to the Cyprus–India Business Forum in Mumbai.

Anastasiades said his presence at the forum reaffirmed “in the strongest possible terms the strong will of the government and the people of Cyprus for even closer bonds with the Republic of India”.

The forum was organised by the ministry of energy, commerce, industry and tourism, the Cyprus Investment Promotion Agency, the Cyprus Chamber of Commerce and Industry, and the Cyprus-India Business Association, and the High Commissioner of Cyprus to India.

The president said India and Cyprus enjoyed long-standing, excellent relations, based on deeply-rooted historical, political, economic and cultural ties, with a “shared principled stance with respect to international law”.

He said this partnership had significant potential to grow even further, particularly in key fields such as banking and finance, shipping and transportation, education, science and technology, pharmaceuticals, renewable energy and tourism.

Anastasiades said a Cyprus–India Joint Committee on Economic, Scientific, Technical and Industrial Cooperation had been established since 1989, with its 8th session taking place last June, culminating in a Protocol which identified ways and means of developing, expanding and diversifying the bilateral economic relations between our two countries.

The recently signed double tax avoidance treaty, which entered into force in India as of April 2017, and which removed Cyprus as a “Notified Jurisdiction Area”, he said, “will contribute to further strengthening the economic ties between Cyprus and India, particularly in the field of investments on which Cyprus ranks as the 8th biggest foreign investment country to India,” he said.

Anastasiades mentioned that during his visit to New Delhi on Thursday, a number of bilateral agreements and Memoranda of Understanding would be signed in the fields of Merchant Shipping, Air Services, Agricultural co-operation, education and culture.

He said the education sector had the capacity of becoming another significant area of collaboration between Cyprus and India while there were great prospects related to science and technology, on which India possesses much-needed and much-welcomed experience and expertise, which could greatly benefit Cyprus.

For this reason, Anastasiades said recently the “Start-up Visa Scheme” was established, under which startups from India can easily locate in Cyprus and have easy access to the EU market.

Other areas of co-operation which could be actively explored are those of renewable energy on which Cyprus has a long-standing expertise, and tourism, the President said, noting that the Protocol on Air Services Agreement to be signed on Friday in New Delhi could pave the way for establishing direct connectivity between the two countries.

He said through the joint efforts of government and industry “we shall succeed in making Cyprus a top-notch destination for business and investment”, pledging support to the local and foreign business community and underlining that Cyprus, despite its small size, offers exceptional comparative advantages as a major centre of international business, but also as a base from which inroads into regional markets could be achieved.

Anastasiades further said the Government has developed a new legal framework, which establishes the procedure of direct licensing of large investments, and it applies on pilot cases a fast track licensing mechanism for investment projects.

Based on this framework, he added, “I would encourage foreign investors, including Indian investors, to invest in projects in Cyprus, which the presidency can promote through its fast track mechanism for receiving the relevant licenses within short and specific time-frames”.

From Mumbai Anastasiades was travelling to New Delhi where he will meet with the leadership of the government of India on Thursday.
Anastasiades will also be the keynote speaker at a business forum organised by the business associations of Cyprus and New Delhi.

Arrest after man stopped with rifle cartridge at Paphos airport

Explosion at house in Limassol