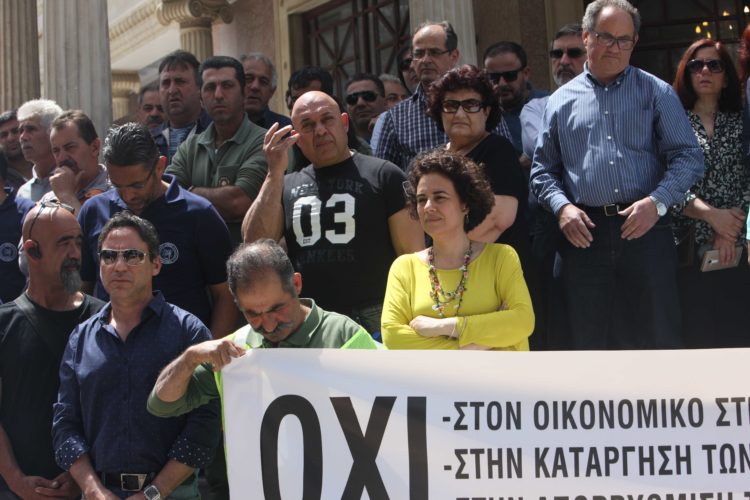 Nicosia municipality workers during the strike

The current local authority model in Cyprus is outdated, the number of municipalities is excessive, and they are overstaffed, Interior Minister Socratis Hasikos said on Thursday, as workers staged a one-hour strike to protest their plight.

“The municipalities’ dire financial situation is not a recent phenomenon nor a result of any reduction in state funding gradually applied as a result of a wider austerity due to the economic crisis,” Hasikos said in a written statement.

The minister said the crisis uncovered the chronic problems of mismanagement, lack of checks, and overstaffing “which we hid under the carpet in previous years.”

The chairman of the union of municipalities appealed to the government on Wednesday to reinstate the full sum of state funding, saying some authorities were on the verge of default.

Workers staged a strike on Thursday to protest the plight of municipalities and to demand from parliament to approve reforms.

“The local authority model implemented in Cyprus is dated and anachronistic, it does not serve the needs of a modern European society,” Hasikos said. “On the other hand, there is an excessively large number of municipalities with costly departments.”

The government is seeking to cut the number of municipalities from 30 to 22 initially, and look into the matter again in the future with a view to further reducing their number.

Party filibustering has seen the local government reform package languish at committee level since July 2015, when it was first submitted by the interior ministry.

The minister said the government held discussions with all parties for two-and-a-half years to find common ground.

“The bill for local authority reform was eventually submitted to parliament by the ministry on July 16, 2015, and is being discussed since,” Hasikos said. “I will agree with municipal workers, who are protesting today that approval of the reform is urgent.”

In October last year, Interior Minister Hasikos proposed the postponement of municipal elections in December for a couple of years so that the reforms could be put in place.

The idea was rejected by the parties. Hasikos then suggested mayors and councillors could serve a term of two-and-a-half years instead of five but this was also turned down.

These include cash-flow problems, big delays in debt collections, loans in excess of €300m for some, failure to submit accounts within the period specified by law, non-existent audit procedures and debts to pension funds in excess of €150m.

The role of motivational style in achieving your goal