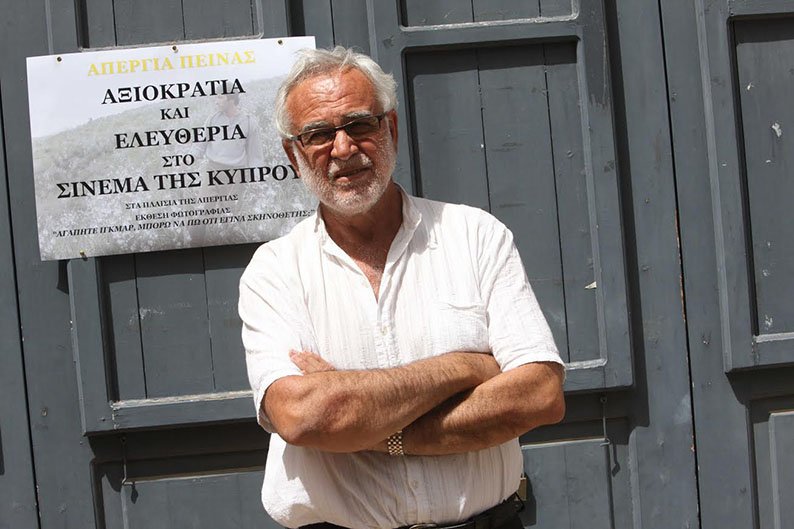 Panicos Chrystanthou at the end of Ledra Street

Director Panicos Chrysanthou, began a hunger strike on Thursday as a protest over discrimination and exclusion in the field of cinema.
During a news conference at the end of Ledra Street, where he is staging  his hunger strike, he called for the cultural services of the ministry of education to deal with the problems he is facing as a director, which, as he says, concern the very structure of the system in which Cypriot cinema is produced.
Chrysanthou referred to his film “Akamas” and the financial debt of €180,000 he is called to repay, for which he blames the cinema advisory committee of the ministry of education and culture.

“The ‘Akamas’ film left me with €180,000 of debts, due to deliberate delays in payment, administrative measures, breach of the cogeneration contract and a ban on the film. The state officials violated the principles of the law,” he explained.

The government did not take direct action to stop the film production but it made it very difficult for its successful completion by withdrawing crucial funds and severely limiting its market potential by making distribution almost impossible and by banning it from Cypriot TV and Cypriot cinemas. The government was also reported to have attempted to censor a specific scene in the film by using its funding as a pressure for censoring the filmmaker said.
The Cyprus president at the time, Tassos Papadopoulos, had instructed the minister of education not to allow the “Akamas” film to be shown Chrysanthou said. “This was an unprecedented scandal, not only because the president of the republic was involved in a censorship case but also because the decision was taken before the film ended and before anyone saw it”.

Moreover, Chrysanthou wondered what was the purpose of the exclusion of art films? “Follow the money as the British say, and perhaps you’ll find an explanation. All I can say is that this action favors certain individuals and excludes others” he asserted.

Besides “Akamas”, Chrysanthou’s documentary “Our Walls” was shown across Europe and although it received very positive reviews, it was banned in Cyprus both from CyBC and the Turkish Cypriot BRT TV. The documentary, which was excluded from the field of cinema, was first published in 1993, several years before the opening of the barricades, at a time when the relations between the two communities were minimal and the bias was at a peak.

It is recalled that the most recent film by Panicos Chrysanthou was the “The Story of the Green Line”, which premiered at Nicosia’s K-Cineplex in March and the public’s response was massive. The film’s story focused on bonds formed between Turkish Cypriots and Greek Cypriots.

Eide: talks going better than what they appear