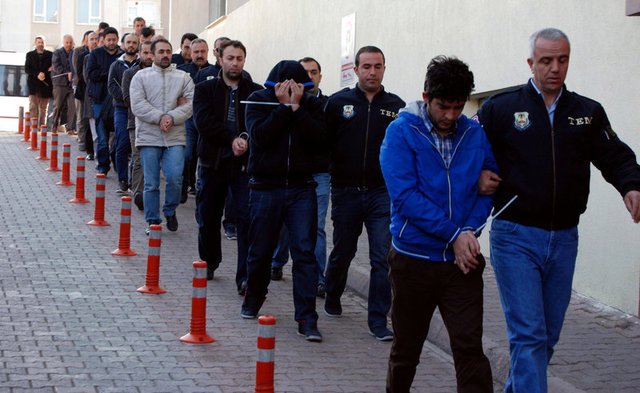 Suspected supporters of the U.S.-based cleric Fethullah Gulen are escorted by plainclothes police officers as they arrive at the police headquarters in Kayseri

Turkish authorities said they had arrested more than a thousand “secret Imams” who had infiltrated police forces on behalf of a U.S.-based cleric accused by President Tayyip Erdogan of trying to topple him last July.

The nationwide sweep was one of the largest operations in months against suspected supporters of the cleric, Fethullah Gulen, a former ally of Erdogan. Gulen denies any part in the coup led by military officers.

“One thousand and nine secret imams have been detained so far in 72 provinces, and the operation is ongoing,” he told reporters in Ankara.

Another 9,103 personnel from Turkey’s police force were suspended on Wednesday, police headquarters in Ankara said in a statement on its web site, citing alleged links with Gulen’s network.

In the aftermath of the failed July coup, authorities arrested 40,000 people and sacked or suspended 120,000 from a wide range of professions including soldiers, police, teachers and public servants, over alleged links with terrorist groups.

The referendum bitterly divided Turkey. Erdogan’s critics fear a further drift into authoritarianism, with a leader they see as bent on eroding modern Turkey’s democracy and secular foundations.

Erdogan argues that strengthening the presidency will avert instability associated with coalition governments, at a time when Turkey faces problems including security threats from Islamist and Kurdish militants.

“In Turkey, there was an attempted coup with a goal of toppling the government and destroying the state,” he told Reuters in an interview late on Tuesday.

“We are trying to cleanse members of FETO inside the armed forces, inside the judiciary and inside the police,” he said, using an acronym for the label, Gulenist Terrorist Organisation, which the government has given to Gulen’s supporters.

The president compared the struggle against Gulen with the state’s battle against Islamic State and Kurdish PKK militants, who are designated terrorist organisations by Turkey, the European Union and the United States.

Mass detentions immediately after the attempted coup were supported by many Turks, who agreed with Erdogan when he blamed Gulen for orchestrating the putsch which killed 240 people, mostly civilians. But criticism mounted as the arrests widened.

Many relatives of those detained or sacked since July say they have nothing to do with the armed attempt to overthrow the government, and are victims of a purge designed to solidify Erdogan’s control.