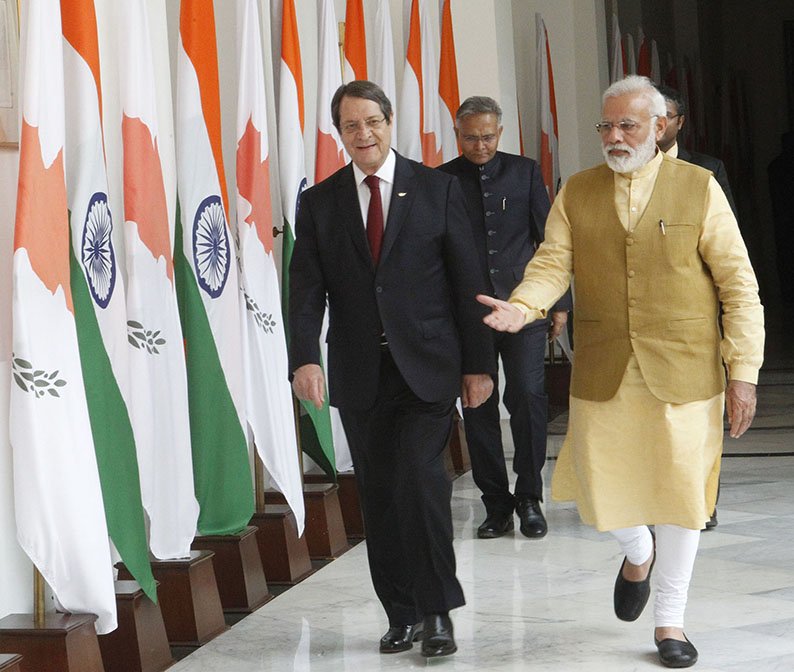 PRESIDENT Nicos Anastasiades and Indian Prime Minister Narendra Modi on Friday expressed their conviction that relations between the two countries would reach a new level after signing a number agreements on culture, education and scientific cooperation, merchant shipping, air services and agriculture.

Speaking at a press conference in New Delhi, Anastasiades said the meeting was yet another stepping stone in the countries’ common history and has provided an opportunity to take stock of bilateral relations and explore concrete ways in which to take these relations forward, by identifying specific areas to work together to modernize the relationship and amplify the benefits for both sides.

He also said that the agreements the two countries signed furthered enhance the long-standing relations between India and Cyprus, and add to the extensive existing legal framework, which included 16 bilateral agreements and memoranda of understanding.

“Prime Minister Modi and I share the conviction that our bilateral relations are excellent,” Anastasiades said. “We have discussed ways and areas where we must further promote the cooperation between India and Cyprus in the economic, investment, and tourism fields.”

The Cypriot president added that the two countries stand ready to explore enhanced cooperation in fields such as renewable energy, solar energy, information technology, and innovation where India is a pioneer.

“Cyprus welcomes the participation of Indian companies in the development of knowledge-based industries, and I would like to extend an invitation to Indian companies to consider investing in a technological park in Cyprus, which will provide them easy access to Europe, North Africa, the Middle East and the Gulf region,” he said.

The president said EU and India shared common values, in particular as regards the rule of law, democracy, and free and fair trade, and pointed that Cyprus was a firm supporter of the enhancement of the EU-India strategic partnership and dynamic cooperation in all areas of mutual interest.

He also said that they both agreed on the crucial importance of the EU and India working closely together to effectively tackle major global challenges, such as climate change, sustainable development, the protection of maritime environment and international terrorism.

“The industry and business in our two economies can shape attractive partnerships through the flagship programmes launched by my government. The beautiful landscapes of Cyprus and the wide horizons of ‘Incredible India’ can be a source of tourism promotion in both our countries,” he said.

Marie Eleni is No. 13 on Interpol abduction list for Cyprus