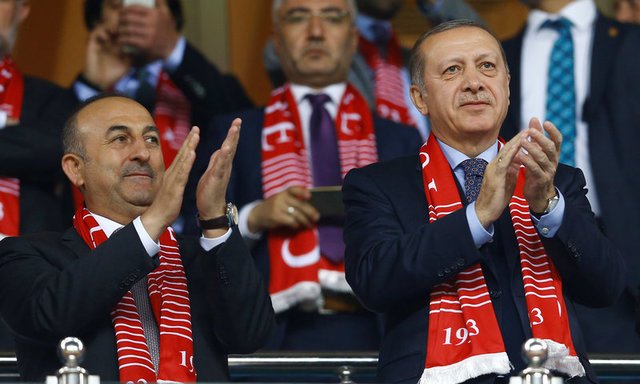 Increasingly worried with what the European Union sees as Erdogan’s growing authoritarianism, EU lawmakers called this week for a formal suspension of Turkey’s long-stalled EU bid, saying it does not meet democratic standards.

But German Foreign Minister Sigmar Gabriel, who will discuss the issue on Friday with his EU counterparts and with Turkey’s top diplomat Mevlut Cavusoglu, said such a step would be counterproductive.

“The German government is strictly against cancelling the (accession) talks, that would be totally the wrong reaction,” he told reporters as he arrived for the meeting in Malta.

“Those who would like to win applause at home because they say ‘We do not talk to Turkey any more’ will not change anything in Turkey,” he said.

Austria has led calls to abort the process, which was launched in 2005 and has been frozen by political obstacles over Cyprus and resistance in some EU states to let in the majority Muslim country, even before this month’s referendum.

“It would be absolutely wrong to stick to the illusion of accession (to the EU),” Austria’s Sebastian Kurz said.

Erdogan narrowly won a referendum to implement the biggest overhaul of Turkey’s political system since the modern state was established nearly a century ago.

Supporters say it will give Turkey stability but EU officials and Turkey’s opposition say it is the beginning of one-man rule.

Erdogan’s security crackdown following a failed coup last July, his ‘Nazi’ jibes against EU states Germany and the Netherlands, and what the bloc sees as persecution of dissenting voices, have provoked a crisis in relations.

The Netherlands and Luxembourg, Germany’s traditional allies on foreign and economic policy, also called for a new approach to Turkey, a Nato member of 80 million people that sits strategically between Europe and the Middle East.

Dutch Foreign Minister Bert Koenders said the European Commission, which handles membership talks with Turkey, should clarify where Ankara stands in meeting EU entry criteria to give EU governments a solid ground for any further decisions.

“We have serious concerns,” Koenders said.

Lithuania and Hungary urged caution, saying the EU needed to maintain dialogue with Ankara, especially because it depends on Erdogan’s help on keeping a lid on the flow of Syrian refugees to Europe.

“Turkey is a key country in the region, we have to stay engaged, we have to talk, to listen,” Lithuania’s Foreign Minister Linas Linkevicius said.

Erdogan told Reuters in an interview this week that Turkey would reconsider its position on joining the European Union if it was kept waiting much longer.

The European Union is Turkey’s biggest foreign investor and biggest trading partner, while Turkey’s border with Iraq, Syria and Russia in the Black Sea make it an important ally.

One way forward could be by broadening the European Union’s trade ties with Turkey, giving Turkish companies greater tariff-free access to the bloc’s 500 million citizens, and to sweeten any political blow from a formal suspension of accession talks.

“Negotiations are possible on the customs union and we should use that leverage to say to Turkey, what do you want exactly?” France’s Jean-Marc Ayrault told reporters.

Dad says abducted girl is with him (update 2)

A tale of two stock markets: how London still trumps Paris for investors