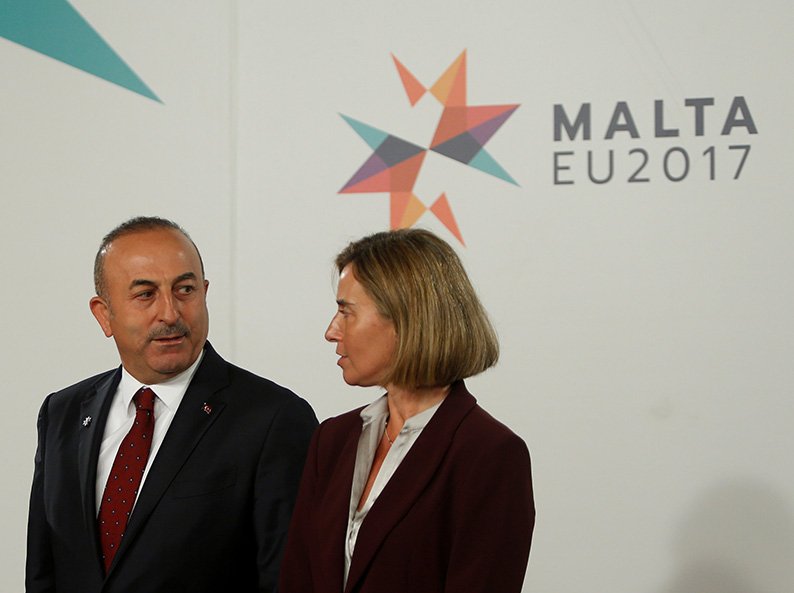 FRANCE and Germany sought a new deal with Turkey on Friday to repair relations with President Tayyip Erdogan but would not say whether the Turkish leader’s new powers and his crackdown on opponents had ended the country’s EU ambitions.

Worried by what the European Union sees as Erdogan’s growing authoritarianism, EU lawmakers called this week for a formal suspension of Turkey’s long-stalled EU bid, saying it does not meet democratic standards.

German Foreign Minister Sigmar Gabriel, who held talks in Malta with his EU counterparts and with Turkey’s top diplomat Mevlut Cavusoglu, said he was “strictly against” annulling Turkey’s decade-long bid for EU membership.

But after a day of talks, he said the real issue was to ensure the bloc had a new, looser agreement to offer Turkey before ditching the EU accession process.

Since its launch in 2005, the entry process has helped Turkey win foreign investment and become the world’s 15th largest economy, EU officials say. But talks have since stalled.

“It does not improve things by cancelling something before we have something new to offer,” Gabriel told reporters.

“We can try to open new channels for negotiations,” he said, referring to an idea to broaden the European Union’s trade ties with Turkey, giving Turkish companies greater tariff-free access to the bloc’s 500 million citizens.

That could soften any political blow from a formal suspension of accession talks, EU officials said.

Austria has led calls to abort the process, which has been frozen by political obstacles over Cyprus and resistance in some EU states to let in the majority Muslim country, even before this month’s referendum.

“It would be absolutely wrong to stick to the illusion of accession (to the EU),” Austria’s Sebastian Kurz said.

Ending Turkey’s five-decade-old dream of joining the European Union is sensitive because the West worries about isolating an important NATO ally that straddles Europe and Asia.

The European Union is Turkey’s biggest foreign investor and biggest trading partner, while Turkey shares a border with Iraq, Syria and with Russia in the Black Sea.

During a part of the meeting broadcast to reporters, a confident-looking Cavusoglu embraced a number of foreign ministers.

He appeared to put aside weeks of insults in the run-up to this month’s referendum in which Erdogan narrowly won a mandate to implement the biggest overhaul of Turkey’s political system since the modern state was established nearly a century ago.

“How can we ignore Turkey? We have to fight terrorism, we want Turkey to respect the migration deal with have,” Ayrault said, referring to last year’s agreement with Turkey to stop the flow of Syrian refugees to Europe in return for EU money.

“Nobody wants a break-up with Turkey. It is up to them to say what they want,” he said.

Supporters of Erdogan’s decision to create an executive presidency with few checks and balances say it will give Turkey stability. EU officials and Turkey’s opposition say it is the beginning of one-man rule.

Erdogan’s security crackdown following a failed coup last July, his ‘Nazi’ jibes against Germany and the Netherlands, and what the bloc sees as persecution of dissenting voices, provoked a crisis in relations.

Erdogan told Reuters in an interview this week that Turkey would reconsider its position on joining the European Union if it was kept waiting much longer.