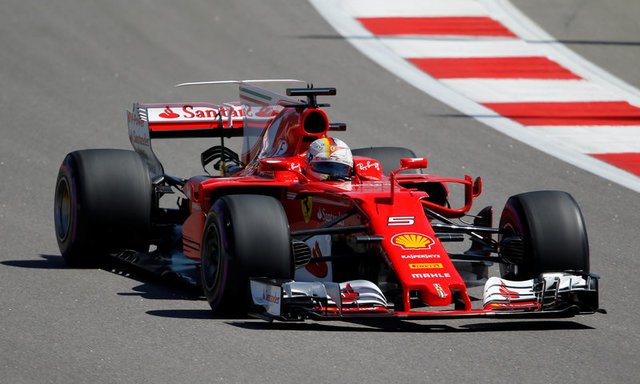 The pole, Vettel’s 47th, ended a run of 18 in a row for once-dominant world champions Mercedes, who had Valtteri Bottas and Lewis Hamilton right behind the two red cars in third and fourth places.

The German, a four-times world champion with Red Bull, has won two of the first three races and leads triple champion Hamilton by seven points in the championship.

As a measure of Ferrari’s achievement in breaking the Mercedes stranglehold and returning to form, the pole was only the Italian team’s sixth since 2008.

It was also Ferrari’s first front row sweep since Brazilian Felipe Massa, now with Williams, and Raikkonen qualified first and second at the French Grand Prix — a race no longer on the calendar — in June 2008.

Statisticians would have to thumb back to the 2015 Singapore Grand Prix, 31 races ago, to find the last time Mercedes had no car on the front row.

“The first run was not really tidy, so I left it to the end, and I improved some time in the last sector,” said Vettel, who had to wait before confirmation came over the radio that Mercedes were beaten.

Bottas was fastest in the first two phases of qualifying, with the choice of tyres coming into play, and those who had suspected the champions were hiding their pace in practice appeared to be justified.

But that too was a false dawn, with glum looks and shaking heads in the Mercedes garage as the reality of the situation emerged.

“I just wasn’t quick enough today, it was all in the last sector… so there’s some work to do,” said Hamilton, who had racked up six poles in a row before Bottas took his career first in Bahrain two weeks ago.

“Ferrari are quickest in qualifying and generally in race trim, so it will be interesting to see where we stand tomorrow,” added the Briton.

Bottas, who has yet to win a grand prix and joined from Williams in January, recognised Mercedes had expected far more from a circuit where they have led every lap since the race first appeared on the calendar in 2014.

“For sure they have a very good car and we are struggling to compete with them,” he said of Ferrari.

“Personally, and as a team, coming into this weekend probably we were thinking that it’s going to be better than Bahrain. So far it’s turned out to be not so good and Ferrari seems to be doing something better here than us.

“So for sure it’s disappointing for us not to be on pole,” added the Finn.

Australian Daniel Ricciardo qualified fifth with Massa sixth and between the two Red Bulls with Max Verstappen behind in seventh.

Renault, who have struggled to score points, again had a car in the top 10 on the grid with Germany’s Nico Hulkenberg qualifying eighth.

Hulkenberg’s British team mate Jolyon Palmer compounded a miserable day, after an overnight chassis change and then a replacement engine, by crashing out of the first phase.

Bottas on pole in Turkey after Hamilton penalty