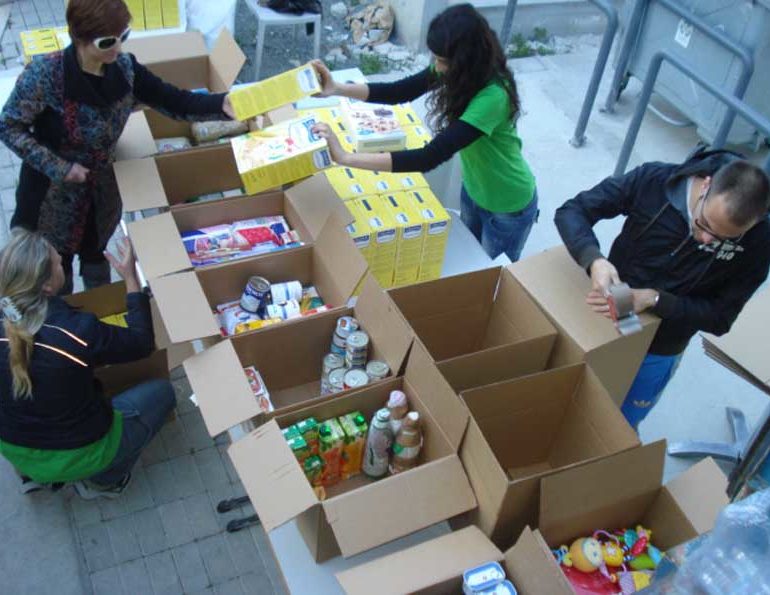 Solidarity volunteers filling food boxes at the height of the crisis

A DEFUNCT Paphos charity which closed its doors last year is being relaunched to help feed needy local families and they are appealing for urgent donations of non-perishable items.

Solidarity, a charitable initiative, was set up in 2012 to help those on low incomes of any nationality or background living in the Paphos district, providing them with the basic essentials and whatever else they could.

It closed its doors last year, after helping hundreds of families and individuals, when officials stated that the numbers of those in need had sharply declined because of an improved state benefit system and a general economic upturn and Solidarity’s monthly operational overheads could no longer be justified.

However, one of the original founders of the charity, Pavlina Patsalou, told the Sunday Mail that she has been made aware by another volunteer Mikka Heaney, that there are still families living in poverty in Paphos. The pair are now in the process of registering a new charity, ‘The Angels of Solidarity’ in order to help them, she said.

“This is in my heart and I have to help. There are people who don’t have anything in their fridges, they can’t pay their rent or electricity and they don’t have any way of putting credit on their phones, it’s heart-breaking,” said Patsalou.

Patsalou said that in some cases, families who may be getting help from the government in the form of state aid are still falling through the cracks, as it just isn’t enough to cover their basic living requirements.

Currently, the guaranteed minimum income (GMI) which is administrated through the labour ministry equates to a €480 monthly income for the applicant, €240 for his or her spouse and each family member between 14 -28 years old, and €144 a month for each family member under 14.

The GMI shouldn’t be confused with the minimum salary, which differs in each professional category. Office and shop workers, for example, are set a minimum monthly salary of €870. Part time workers and those with a monthly income below €480, are entitled to receive a minimum income allowance. Help is also available to those with an income which is less than the minimum income guaranteed.

“It just isn’t enough to pay for everything in some cases. These people can’t pay their rent and their utilities, buy food, feed their families and clothe them, they need help,” Patsalou.

Patsalou was unwell for some time, which she said was caused by the stress of running the charity and endless calls to her personal phone by individuals and families requesting help. She now feels well enough to focus once again on helping those who need it, she said.

A previous ‘Hearts of Gold Cyprus’ winner, nominated for her unwavering dedication to others, the volunteer is now giving her full backing to the new charity, which she said will be run in a more organised and less stressful manner.

Heaney said that lessons had been learnt from the past and the emotional scenes that saw 100 needy Paphos families, including mothers with babies, being turned away after volunteers ran out of food in 2013, would never be repeated.

“We are more organised this time and the numbers needing help are less. It won’t be madness and mayhem and there won’t be hordes of people descending on us and sorting through clothes. We will take what is needed to the families,” she said.

The original charity which was founded by George Sofokleous, a Paphos councillor, and Patsalou, cost around 2000 euros a month to run, according to Sofokleous.

“We are happy to have helped so many people, and slowly the economy is better. People will always need help, but thankfully the numbers are now very small,” he said when Solidarity closed down last year.

However, another initiative titled the Gift of Love, which ensures that children of needy families in Paphos were all given gifts to open at Christmas, as well as essentials for babies, found that there are still families without enough to live on. Gift of Love had previously been affiliated with Solidarity, and after its closure, continued independently led by Heaney and fellow volunteer Dikla Smith. Both had previously also volunteered at Solidarity charity.

“Previously it was all too political, each action had to be passed by numerous board members. The Gift of Love proved that help is still needed,” she said. “People came to us after Christmas asking for baby milk and food. We want to ensure that everything is done correctly and legally. We need to be registered, which is what we are doing now.”

Heaney said that they are already helping 20 families including Syrian refugees.

“One family’s mother is ill in hospital and is unable to breast feed. They have children and they have nothing,” she said.

In another case, a family in Polemi are in need of assistance. Both parents are out of work and they have four children ranging from two years old to 12.

“They have a small farm and eat what they grow, but it isn’t enough and as the bank classes the land as equity, they think they have money and this is not the case. They sold their car to get cash, the children have no way to get around. They don’t have bicycles, let alone toys.”

Donations of clothes are currently being stored in the old Solidarity house until the beginning of next week, when the volunteers will have to find alternative premises to operate from.

“We desperately need a base where donations can be stored and sorted,” said Heaney.

Patsalou said they are appealing to see if anyone could donate a house or space in the old town for free.

Both women said that ‘Angels of Solidarity’ are desperate for donations of food, such as dried goods including, rice, pasta and cereal, canned goods, cooking oil, toiletries, baby milk, baby bottles, nappies, blankets, baby shampoo, baby wipes and baby clothes.
A list of drop off points across Paphos are available at their Facebook page https://www.facebook.com/Solidaritypaphos/