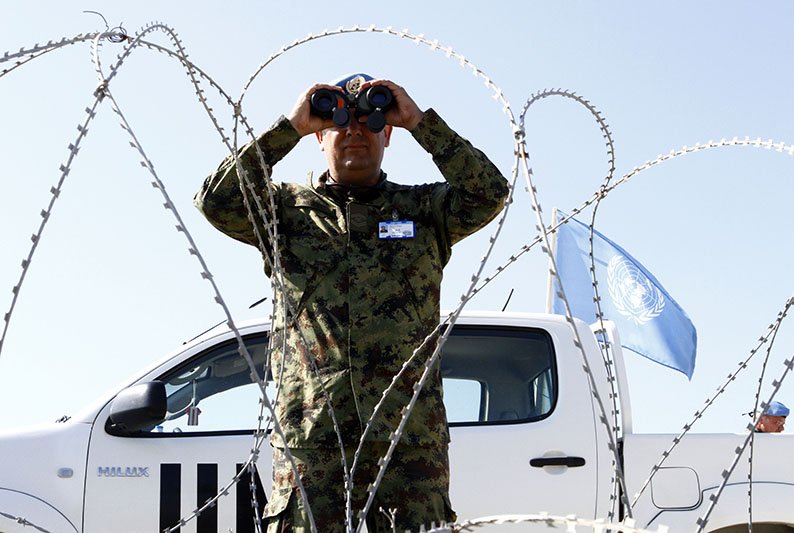 THE NEW US administration’s cuts in its funding of peace missions put in motion a process to re-evaluate them at UN headquarters, and on April 6, a thematic debate, entitled Peacekeeping Operations Review, took place at the Security Council.

The opening remarks by Secretary-General Antonio Guterres and the working paper presented by the US permanent representative, also the president of the Security Council in April, suggested that UN peacekeeping force in Cyprus (Unficyp), without a solution to the Cyprus problem, had been exhausted.

The current status quo constitutes the biggest obstacle to a settlement of the Cyprus problem because it offers society a superficial security and stability. The other side is like another country. What goes on there does not concern or interest us because it does not affect our daily lives.

We owe the sense of security we feel to the buffer zone, which operates like a huge and impregnable wall. The buffer zone has become something like a closed curtain that does not allow us to see the real face of the existing situation on the other side. This curtain is kept drawn by Unficyp, the strength and activities of which are of no relevance or interest.

What is important to people is that there is a trustworthy international observer that guarantees the inviolability of the buffer zone. This is how the simplistic view, “they on that side and we on the other”, has become rooted in our society.

Let us imagine our lives without Unficyp. We will not even talk about the possibility of a war that could be sparked by a misunderstanding or an accident. We will remove from our minds the irreparable damage to tourism and the economy as a result of tension caused over the control of the buffer zone. We will not take into account the natural gas that would remain indefinitely under the Mediterranean Sea.

Instead, let us restrict ourselves to the small daily things such as the sense of security provided because someone on the dividing line is watching over us. Without Unficyp, would we sleep as well at night if we live close to the dividing line? In those first years after the invasion, the areas close to the dividing line were deserted. When gun fire was heard from the occupied areas (sometimes it was fireworks) there would be an exodus of cars from Nicosia, heading for Limassol or the Troodos mountains. Are we ready to return to those times?

The only stable solution is a permanent solution. If we do not want a permanent solution, the UN has no responsibility to watch over us so we can sleep easily at night, even as our newspapers bad-mouth the organisation, day and night. If the present opportunity is lost and the Cyprus problem remains unsolved, the withdrawal of Unficyp from Cyprus would be inevitable.

And this would be neither a conspiracy nor a punishment. After all, the UN discussion about the future of peace missions began before we decided to wreck the peace process. Consequently, the choice over which security regime we want to live under from now on, will be exclusively our own.

The view of the UN – which would of course be recorded in the appraisal held in the event of a complete collapse of the process – would be that the Cyprus problem, on paper, was more or less solved. Unbridgeable differences did not exist. The obstacles presented were merely pretexts. The president’s referral to the supreme court of the bill that would revoke the enosis referendum amendment is a case in point. Even the vital issue of security has been resolved, which is why it has been removed from the official rhetoric of fear, which has put all emphasis on the four freedoms, supposedly for 80 million Turks. When Unficyp leaves and there is no settlement that is when we would literally be hostage to 80 million Turks.

Solving the issue of security was the personal achievement of Special Envoy Espen Barth Eide who secured arrangements that were considered unattainable, such as the withdrawal of all troops and the phasing out of intervention rights. In a recent interview, Eide said that in the event of a settlement, “you could be pleasantly surprised on the issue of security.” He was not praised for this because nobody cares about good news. They only care about bad news and if that does not exist, they fabricate it.

It is beyond belief that while Eide secured Turkey’s agreement to withdraw the Turkish army from Cyprus, Greece’s foreign minister Nikos Kotzias sent a letter to Guterres accusing the  Norwegian of being a “lobbyist for Turkey”. Worse still, government spokesman Nicos Christodoulides confirmed that the letter was sent after consultation between Athens and Nicosia.

When a political settlement is killed in this way and the withdrawal of the Turkish army from Cyprus is essentially rejected, how can Unficyp’s continued presence be justified? Anyone who thinks that our contribution of $20 million per year will buy the protection of the UN is making a big mistake, because the issue is not financial but primarily political. It is also a moral issue, given that we are constantly attacking the UN.

Only a mission to implement an agreement would justify the continued presence of Unficyp. This is what will be at stake in the next few weeks.

The importance of the grassroots in growing the peace