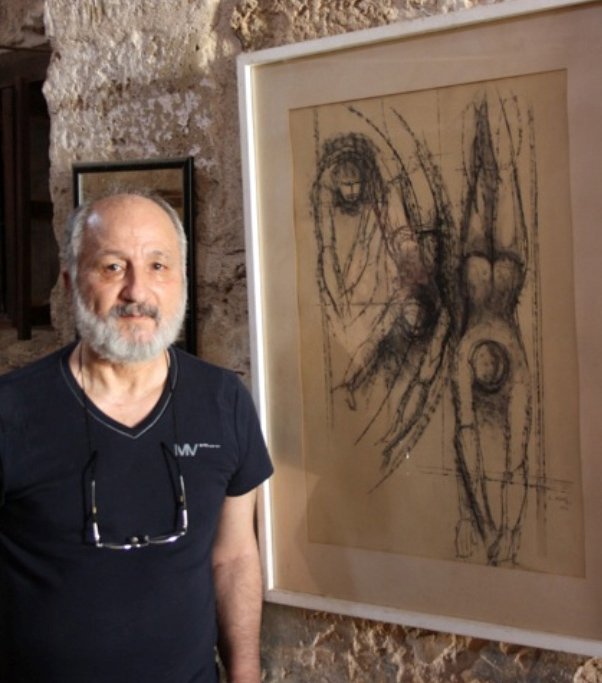 i with a painting by Adamos

The true story of how art can trump politics is the subject of a truly bicommunal exhibition will open to the public next week and is one of the main events of Pafos2017.

‘Risky Travels’ highlights the extraordinary tale of how Turkish Cypriot architect and sculptor, Baki Bogac, found, saved and finally returned the works of a Greek Cypriot artist, Andy Adamos, who had left them behind in Famagusta after 1974.

The exhibition will be inaugurated by the President Nikos Anastasiades on Friday, May 5.

Sergis Hadjiadamos, son of the late Andy Adamos, and his family, as well as Baki Bogac and his family will be in Paphos to attend the opening.

Bogac looked after the artworks for 19 years before finding the opportunity to secretly return them to Adamos’ family in Paphos in 1993, a full ten years before the checkpoints opened. Tragically, Adamos died in 1990 and never lived to see his lost pieces.

The exhibition is an important one on many levels Hadjiadamos told the Sunday Mail.

“The humanitarian aspect is important, the act of Baki of returning the works which were not his, to their original owner is the reason that we are doing this exhibition,” he said. “We want to honour Baki and thank him for his actions.”

Hadjiadamos said that the exhibition is also important as it sums up the philosophy behind Pafos2017.

“Art bridges cultures and divides and brings people together,” he said. “Baki is a refugee from Larnaca and holds no bitterness, instead he did this wonderful thing for my family.”

The exhibition is one of the official events that helped to secure the town’s capital of culture title.

The exhibition will include Adamos’ rescued sculptures and drawings, as well as works of art by Bogac. Hadjiadamos stressed that without Bogac’s determination, following the 1974 Turkish invasion, many of his father’s works would have been lost for ever.

“This is the first time on this scale that two well-known artists, sculptors from Cyprus, will exhibit together in Cyprus. It is a very nice exhibition for people to come and see.”

Hadjiadamos explained the risk Bogac had taken in keeping the rescued art work safe and more particularly in returning it, as back in 1993 the Turkish army and government viewed such actions with suspicion.

Adamos was born in Paphos in 1936 and was a sculptor, engraver, painter and author.

At the end of 1972, he returned to Cyprus and taught sculpture at his studio in Famagusta. In August 1974, he was still there with his wife who was pregnant with Hadjiadamos at the time of the invasion.

Following the invasion, the family fled to the UK and then onto South Africa, where Hadjiadamos was born, returning to Paphos in 1980. Adamos won the first prize at the International Biennale of Cairo in 1986 and published three books before his death in 1990.

Hadjiadamos said that the journey to get to this point had been a long one and involved a lot of effort on his part, in particular in pulling together the exhibition art book which accompanies the event.

“The aim of the book is to highlight their story and has taken a lot of preparation, but it has been worth it. My father would have been proud of this exhibition,” he said.

‘Risky Travels’ will run from May 5 until June 6 at Palia Ilektriki cultural centre in Paphos old town.

Our View: Anastasiades’ own side questioning his faith in talks