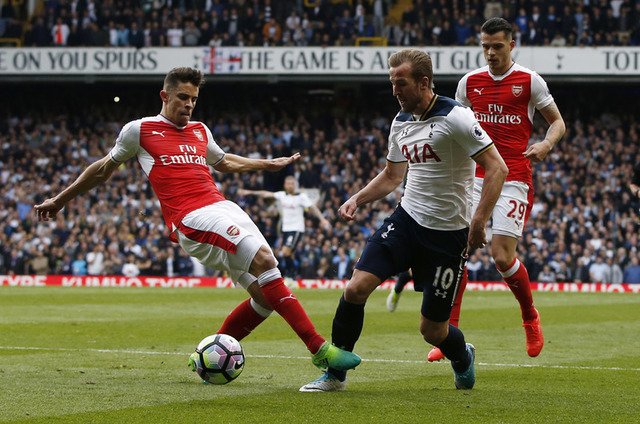 A deserved victory kept them four points behind leaders Chelsea, who won 3-0 at Everton earlier.

Alli put Spurs ahead in the 56th minute when he followed up after Christian Eriksen’s shot was saved. Two minutes later Kane went down in the penalty area under Gabriel’s challenge and got up to convert the penalty.

Tottenham’s victory in Arsene Wenger’s 50th North London derby as Arsenal manager ensured Spurs will finish above their neighbours for the first time in 22 years.

It was their ninth successive league win and the margin would have been greater but for some fine saves by Petr Cech.

April 30 (Reuters) – Chelsea took a major step towards the Premier League title with an impressive 3-0 win over Everton at Goodison Park on Sunday.

A brilliant strike from Pedro in the 66th minute broke the deadlock and then goals from skipper Gary Cahill and substitute Willian made sure of the three points for Antonio Conte’s side.

With four games to play, Chelsea are now seven points ahead of second-placed Tottenham, who take on Arsenal in their North London derby later on Sunday.

The four remaining fixtures look straightforward — Chelsea are at home to Middlesbrough, at West Brom and then at home to Watford and relegated Sunderland and it would take an unlikely series of upsets to stop the West London club from winning their second title in three seasons.

“It feels massive, we did what we need to do and it is a great victory, we knew this was like a final,” Cahill told Sky Sports.

Everton manager Ronald Koeman had no doubt his team had lost to the team who will win the title.

“It is really tough to beat Chelsea. They showed today their belief and their quality. They will be champions,” he said.

If Chelsea were going to slip up late in their title bid then surely it was the trip to Goodison Park to face a seventh-placed Everton who had lost just once at home all season which presented the biggest danger.

There was no sign of a wobble from the Londoners, however, and they came through this test with barely a hint of nerves.

Everton were without their key French international defensive midfielder Morgan Schneiderlin, who was ruled out with a thigh injury, and that robbed them of the solidity that has been a feature of their recent performances.

Nonetheless, the home side started brightly with Dominic Calvert-Lewin striking the post in the second minute after a sublime pass from Ross Barkley.

Koeman’s side struggled to create real openings, however, and Chelsea grew increasingly dominant after the break.

Pedro broke the deadlock in spectacular fashion, making some space for himself and then beating Maarten Stekelenburg with a left-foot drive from 25 metres out that flew into the top corner.

The visitors doubled their advantage when Stekelenburg could only parry out a low, diagonal free kick from Eden Hazard and captain Cahill pounced to fire home the loose ball.

Two Chelsea substitutes combined for the third goal, four minutes from the end, when, after a clever exchange with Diego Costa, Cesc Fabregas slipped the ball to Willian for a simple close-range conversion.

The visiting fans applauded their team off the field at the end, confident that there will be more celebrations to come in the next few weeks.

“This was an important win but now we need to take it game by game and win these games,” said Conte.

“This has been an important week for us and we have ended it positively,” he said.