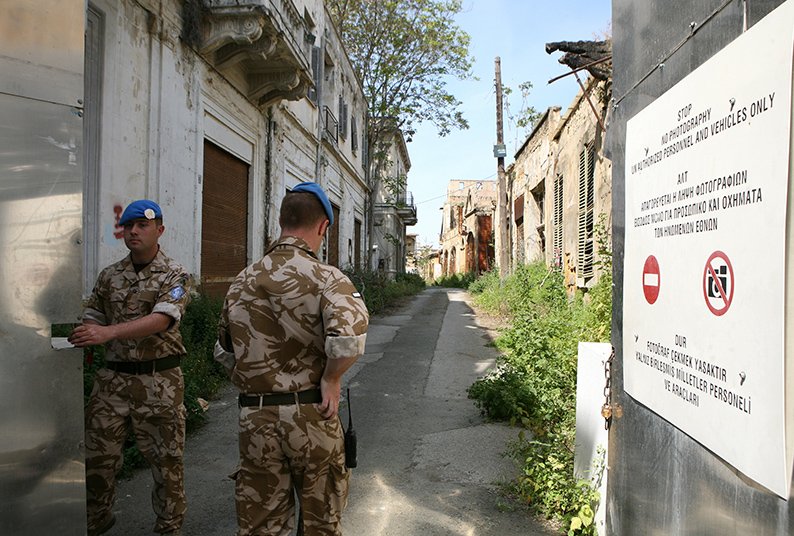 As the Trump administration shifts gears in its policy toward the United Nations, and with international pressure mounting on Cypriots to solve their dispute, word has it that this time the powers-that-be may mean to disband the United Nations Peacekeeping Force in Cyprus or at least scale it down.

Unficyp is one of the longest-running UN peacekeeping missions. It was set up in 1964 as a temporary force to prevent further fighting between the Greek Cypriot and Turkish Cypriot communities.

Its mandate is to prevent a reoccurrence of fighting, maintain law and order in the buffer zone and promote a return to normal conditions in which a settlement could be negotiated. Fifty-three years later, Unficyp is still here.

Speaking on condition of anonymity, an analyst apprised of the matter told the Sunday Mail he had information – including from contacts with foreign diplomats – there is a “good chance” the UN may shutter their Good Offices mission in Cyprus unless some breakthrough occurs in the talks by June or July.

And given it’s no secret the talks could be headed for an impasse, that likelihood becomes greater still.

As for Unficyp, the same source said there is a debate going on right now inside the UN on what to do with the peacekeeping mission in Cyprus. Significantly, some of the pressure is coming from the Americans.

Again, in the event of a standstill in negotiations, and with the 2018 election cycle kicking off this summer in the Republic, there are quarters inside the UN considering either a full-on closing down of Unficyp or at the least a scaling down of the Blue Berets. It’s harder to gauge whether this is tactically motivated – putting the squeeze on Cypriots to solve the problem – or if the movers and shakers of the world are dead-set on shuttering Unficyp no matter what.

“The Cyprus mission is the safest in the world. In all honesty, for the Blue Helmets getting posted to Cyprus is almost like a holiday, except for the occasional running about in the buffer zone,” the source commented.

“Meantime real conflicts are raging elsewhere in the world, places where UN troops are really needed.”

On the other hand, Unficyp has been cut to the bone over the years. Its current strength is 1,102 total (including uniformed and civilian personnel). This might not seem many to cover the 180 km of buffer zone, and officers say it is just about enough in the current operating conditions. A further scaling back of UN personnel may therefore not be feasible for practical reasons.

One possibility being floated, according to the same analyst, is for the concerned parties – Cyprus, Greece and Turkey – to shoulder the cost of maintaining UN troops on the island.

Noises about withdrawing or cutting down the UN’s presence in Cyprus have been made before. This time, however, things may be different.

The Trump administration is proposing sweeping cuts of up to 40 per cent in voluntary US support for the United Nations and other global bodies.

At any rate, the July timeframe is the one to watch – especially as exploratory offshore gas drilling is scheduled to start off the southern coast of Cyprus. With Turkey almost certain to respond in some fashion, one can reasonably expect yet another derailing of the talks process.

On April 4, the Permanent Representative of the United States to the United Nations addressed to the UN Secretary-General (UNSG) a letter on the matter of “Peacekeeping operations review.”

In it, the US government posed the following question: “What should the [Security] Council do in situations where there is no political process to support? What if the missions serve a valuable protection role, but without any conceivable conclusion to this role?”

The US Representative went on to express concern over “mission creep” in UN peacekeeping missions, asking:

“How long should the Council wait before re-examining the value of a mission when the political process breaks down? Would it be beneficial to institutionalise the inclusion of clear exit strategies in every mission’s mandate?”

In his response, dated April 6, UNSG Antonio Guterres said: “In the short term, we must end operations that have achieved their goals and reform those that no longer meet needs on the ground.”

The UNSG said the missions in Côte d’Ivoire and Liberia would soon close, adding that “we must consider reforms and exit strategies for other long-standing missions.”

Guterres next identified nine areas of reform, one of which was: “…peacekeeping operations need clear, realistic and up-to-date mandates from this Council, with well-identified priorities, adequate sequencing and flexibility to evolve over time.”

Though speculative, Unficyp might well fit into this mould.

Asked to comment, Unficyp spokesperson Aleem Siddique said all decisions to open and close peacekeeping operations are made by the UN secretary-general with the approval of the UN Security Council.

“Our mandate is renewed annually by the Council. Our current mandate will be reviewed by the Council in July 2017. Any changes to this mandate would have to be authorised by the Security Council. These decisions are not made at the field mission level.”

Responding to a question as to what would happen to the buffer zone and the old Nicosia airport should Unficyp pull out, Siddique said “this would be an issue for the two sides to reach an agreement on as part of their on-going talks.”

Disy leader Averof Neophytou – on the inside track of politics – may have had something in mind this week when he sounded the alarm about the coming changes to UN finances.

Speaking to CyBC radio about the trajectory of the peace talks, Neophytou referred to Washington’s drastic funding cuts to the UN.

“But in Cyprus no one is talking about that. We are so insular here, we never take a look at the big picture abroad,” he said.

With 35,000 Turkish troops stationed in the north (though it has been reported these numbers have been vastly reduced in recent months), it is clearly the Greek Cypriots who are the more anxious to maintain a UN presence on the island.

UN Security Council resolutions renewing the mandate of peacekeeping missions require endorsement by all five permanent members of the body. It takes only one veto from a UNSC member to defeat a resolution.

Former foreign minister Nicos Rolandis (1978-1983) recalls the nerve-racking session of the UNSC of June 15, 1978, when the body came within a whisker of not renewing the peacekeeping force in Cyprus.

Eventually, following the longest UNSC session up until then, lasting 20 hours, Resolution 430 (1978) was passed to extend Unficyp’s manadate.

“As far back as 1978, it’s been argued that peacekeeping forces should at some point turn to peacemaking operations, they cannot be allowed to drag on forever,” Rolandis told the Sunday Mail.

Rolandis acknowledges that the ad infinitum presence of a peacekeeping force can serve as a disincentive for resolution, as the involved parties get a little too comfortable with the sense of security provided by the Blue Berets and settle for the status quo.

Still, he thinks it unlikely Unficyp will be shut down.

“It is not just a question of cost, the Blue Berets are here to maintain peace. There are concerns, valid concerns, that following a withdrawal the slightest incident in the buffer zone could escalate into a crisis.

“Would the Turkish army move in to occupy the airport, for example? And if they did, who would stop them? That is something that can’t be ruled out.”

In his opinion, therefore, the more probable scenario might be a rolling back of Unficyp.

One last factor to consider are the career prospects of UN Special Adviser Espen Barth Eide. He is said to be keen on leaving Cyprus soon to prepare for the September elections in his home country of Norway, where Eide is eyeing the foreign ministry portfolio in the government.

Tales from the Coffeeshop: Partition is the solution that dare not speak its name

Cast of ‘The Godfather’ reunite for emotional 45th anniversary