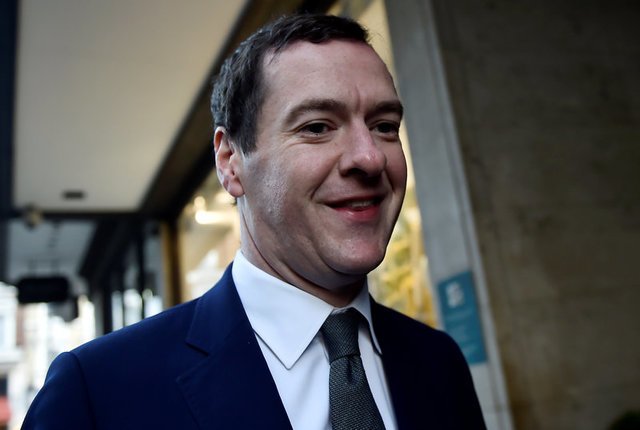 Carrying a bundle of newspapers as he arrived at the offices of the Evening Standard, London’s daily metropolitan newspaper, Osborne said his editorship would provide “the straight facts and the informed analysis”.

The 45-year-old was dismissed last year by fellow-Conservative May after helping to lead the doomed campaign for Britain to stay in the European Union. He will step down as a member of parliament at the June 8 general election.

The Evening Standard’s front page on Tuesday read: “Brussels twists knife on Brexit” and added: “EU chief mocks PM May with her own ‘strong and stable leadership’ slogan”.

After meeting the prime minister at her Downing Street residence last Wednesday, European Commission President Jean-Claude Juncker was reported to have said he was “10 times more sceptical than I was before” about the possibility of sealing a deal on divorce terms for Britain and a new trading relationship.

Osborne said last month he was stepping down from the House of Commons “for now” – prompting speculation that he planned to use his editorship to boost his influence in public debate, paving the way for a political comeback.

The newspaper’s first editorial with Osborne in charge reflected his belief that Brexit is an historic mistake.

“The negotiations over Brexit have only just started and already we see how unrealistic were the claims made about the strength of Britain’s hand — as the account of the Prime Minister’s dinner with (Juncker) reveals,” the paper said.

The Standard published a cartoon depicting May as Big Ben, incessantly chiming her “strong and stable” catchphrase ahead of the June 8 general election.

He was rebuked on Tuesday by parliament’s watchdog for politicians’ business appointments for breaking its rules by applying for the job before consulting it.

He already has a part-time job with a salary of £650,000 a year for working 48 days at asset manager BlackRock, and has earned hundreds of thousands of pounds giving speeches.

Once regarded as a future Conservative leader and a possible prime minister, Osborne had opposed some of May’s policies. British newspapers said her dismissal of the man who served as her predecessor David Cameron’s finance minister for six years was swift and ruthless, lasting only minutes.

While at the University of Oxford, Osborne dabbled in student journalism and was proud enough of his efforts to display the two issues of the magazine he edited in his Downing Street flat while chancellor.

S&P cuts outlook for UK rating to ‘negative’ from ‘stable’