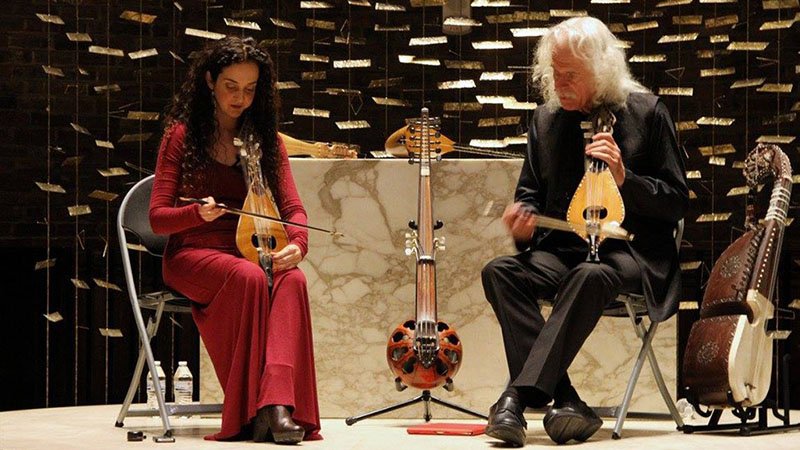 The lyra will be the real show-stopper in the hands of Ross Daly and Kelly Thoma tomorrow in Nicosia.

The pair, who will entertain us with their own compositions, have both studied the world’s various musical traditions and have been inspired and influenced by their dedication to understanding world music.

Although of Irish descent, Daly doesn’t fit into any particular ethnic stereotype as he has lived in many parts of the world, and for the last 35 years he has called the island of Crete his home. At an early age he discovered that music was “the language of my dialogue with that which I perceive to be sacred,” as he said. This dialogue eventually led him to the great modal traditions of the Middle East, Central Asia and the Indian subcontinent where he finally found the musical archetypes for which he had been searching all his life.

In 1982 he established an educational institution called Labyrinth Musical Workshop in the village of Houdetsi in Crete, where 250 instruments which he collected on his travels are housed. The institute also runs music workshops each year, during which hundreds of students from all over the world study with renowned international teachers.

In 1990 the musican designed a new type of Cretan lyra which incorporates elements of lyraki, the byzantine lyra and the Indian sarangi. The result was a lyra with three playing strings of 29 cm in length and 18 sympathetic strings which resonate on Indian-styled jawari bridges.

He has released more than 35 albums of his own compositions and his own arrangements of traditional melodies.

Thomas, who is from Piraeus and now lives in Crete, started styding the lyra with Daly since 1995. After three years of studying with Daly, she began to join him and his musical group Labyrinth on his musical travels. Together they performed in concerts in Europe, Asia, Australia and America.

As part of Labyrinth and the Labyrinth Musical Workshop, Thomas has had the chance to play with many important musicians, including Trio Chemirani, Omer Erdogdular, Derya Turkan and many more.

She has released two albums of her own compositions, Anamkhara in 2009 and 7Fish in 2014. A total of eight songs make up 7Fish and each one is named after a specific fish while the last piece, called S, imitates the movement of fish.

Although both artists have studied world music, the music they present does not actually belong to any single tradition, rather it draws its inspiration from a wide variety of ancient and timeless traditions deriving from the broader world of modal music. These elements are incorporated into a new genre which Daly refers to as Contemporary Modal Music.

This genre, however, has very little to do with what we have usually come to associate with contemporary music. It balances between sounds that may have been heard thousands of years ago and melodies that may be heard in the future.

The pair’s dedication to musical traditions, their passion for the lyra and their knowledge of the sacred nature of the art of music will all come together in their unique concert tomorrow at Theatro Dentro.

A Christmas Carol, a seasonal burlesque

A different kind of Christmas theatre