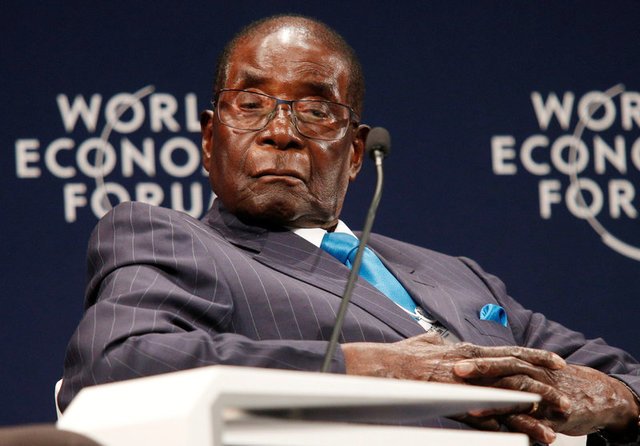 Zimbabwe’s 93-year-old president, Robert Mugabe, sat slumped in his chair, wringing his hands, as he told a panel discussion on Thursday in a low murmur that his country was not a “fragile state”.

Mugabe’s government is struggling with a debt crisis, a fall in foreign exchange inflows, and acute shortages of cash that have forced banks to limit withdrawals, as well as growing resistance to his three-decade rule.

But he told a panel discussion on “fragile countries” at the World Economic Forum for Africa in the South African city of Durban that Zimbabwe’s economy was on the mend.

“Zimbabwe is not a fragile state, it is one of the most highly developed countries, second after South Africa,” he said. “You cannot even talk about us as a ‘fragile state’ from an economic point of view.”

Critics have accused Mugabe of wrecking one of Africa’s most promising economies and causing unemployment of currently around 80 per cent through policies such as violent seizures of white-owned commercial farms and money printing.

He and his party say the economy has been undermined by Western powers.

“This year we will have a bumper harvest. Not just maize, we have cotton and tobacco … we are not a poor country,” Mugabe said.

Despite numerous protests against his leadership, he said many people still supported his government, adding: “Economies cannot grow as quickly as our people expect them to. Investment should have come long ago.”

He is due to lead his ZANU-PF party as its candidate for the next presidential election expected in mid-2018, when he will be 94.

Finance Minister Patrick Chinamasa said last week that Zimbabwe had met all conditions to clear arrears to the World Bank and African Development Bank, paving the way for possible funding from the International Monetary Fund, which last lent Zimbabwe money in 1999.

Microsoft celebrated its 15 years of innovation and presence in Cyprus

Kevin Bacon first met his future wife when she was 12