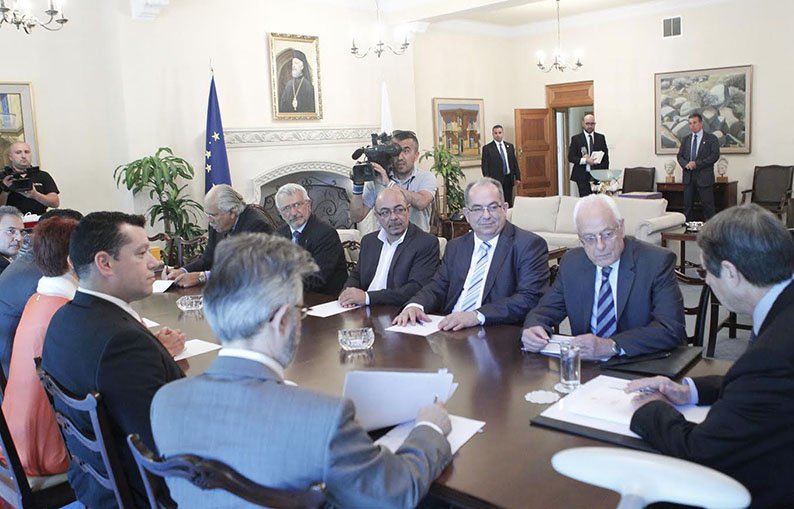 Meeting of the Geostrategic Council

Cyprus will not get drawn into a public dialogue with Turkey over its sovereign rights, the government said on Thursday as Ankara reserved two more areas south of the island for military drills.

Speaking to the state broadcaster, government spokesman Nicos Christodoulides said Turkey’s actions do not impact only the interests of Cyprus, but they are also being noted by those countries which have taken an interest in the trajectory of the Cyprus settlement talks, particularly the five permanent members of the UN Security Council.

The recent results of Cyprus’ third hydrocarbons round are the best response to Turkish provocations in the high seas, Christodoulides added, evidently alluding to the exploration licences granted to energy giants like the US’ ExxonMobil.

The spokesman said Nicosia was taking all appropriate steps to denounce Ankara’s moves in the eastern Mediterranean.

This week Turkey issued two more notices to mariners, or Navtex, reserving areas south of the island for military drills.

On Friday, Turkish navy ships will be executing gunnery exercises (Navtex 450/17) from 5am to 7am in an area crossing into parts of offshore blocks 6 and 7, southwest and south of the island.

Block 6 was recently licensed for exploration to a consortium of Eni and Total. Block 7 is currently unlicensed.

Also on Friday, a Turkish warship (Navtex 457/17) is scheduled to tow an underwater device, again in an area falling within Block 6.

Turkey claims that part of Block 6 falls within its own continental shelf. In a letter addressed to the UN General Assembly dated April 12, Turkey’s permanent representative to the United Nations Feridun Sinirlioglu expressed “grave concern” regarding Cyprus’ “provocative act” to grant an exploration license for Block 6.

A seismic research vessel contracted by the Republic, the Ramform Hyperion, has just departed Block 6, where on Wednesday it had reached a position not far from the area Turkey has reserved for Friday’s live-ammo drills.

By Thursday, the vessel was headed back in an easterly direction, towards Limassol. The Ramform Hyperion is expected to carry out three-dimensional seismographic surveys in the Cypriot Exclusive Economic Zone (EEZ) until mid-August. Surveys will be carried out in blocks 6, 7, 11 and 12.

Meanwhile the Turkish seismic survey vessel Barbaros Hayreddin Pasa was on Thursday located south of the Karpas peninsula and headed in a north-westerly direction.

On April 19 Turkey had issued a navigational warning, reserving an area inside the island’s EEZ, off Famagusta, to carry out seismic surveys between April 21 and June 30.

The reserved area (Navtex no. 410/17) covers an expanse from the bay of Famagusta to Apostolos Andreas off the tip of the Karpas peninsula. The area reserved for seismic studies includes parts of Cyprus’ EEZ, but also extends into part of Cyprus’ territorial waters.

Contrary to previous visits by the Barbaros, this time the Navtex calls on all ships to keep a safe distance of 3 nautical miles.

The 3 nautical miles advice is a departure from previous notices, when ships were advised to keep a distance of 5 nautical miles, which is the norm for seismic surveys. This may suggest the vessel may not in fact be conducting seismic surveys, which would constitute economic activity within the Cyprus EEZ and therefore a violation of Cyprus’ sovereign maritime rights.

To carry out any economic activity, Turkey must ask permission from the jurisdictional coastal state (Cyprus), which it has not, as it does not recognise the Republic of Cyprus.

The Navtex for the Barbaros expires on June 30 – just days before Total and ENI are scheduled to start exploratory drilling for gas in Block 11 south of Cyprus.

Also on Thursday, president Nicos Anastasiades met with the Geostrategic Council, an advisory body, to discuss both the Turkish maneuvers in the eastern Med as well as the recent constitutional referendum in Turkey.

In an interview with the state-run Anadolu news agency published on Tuesday, Meridor apparently said his country supported Turkey’s gas exploration endeavours in the east Mediterranean off Cyprus.

On Thursday, the ‘Israel in Cyprus’ Twitter feed posted:

“#Israel – #Cyprus – Gas – our position hasn’t changed. No interference in other countries relations. This was clarified with #Cyprus govt.”

‘Israel in Cyprus’ is a Twitter feed “dedicated to promoting diplomatic relations, economic growth and friendship between the State of Israel and Cyprus.”

Tusk says Brexit talks will be ‘impossible’ if emotions unchecked