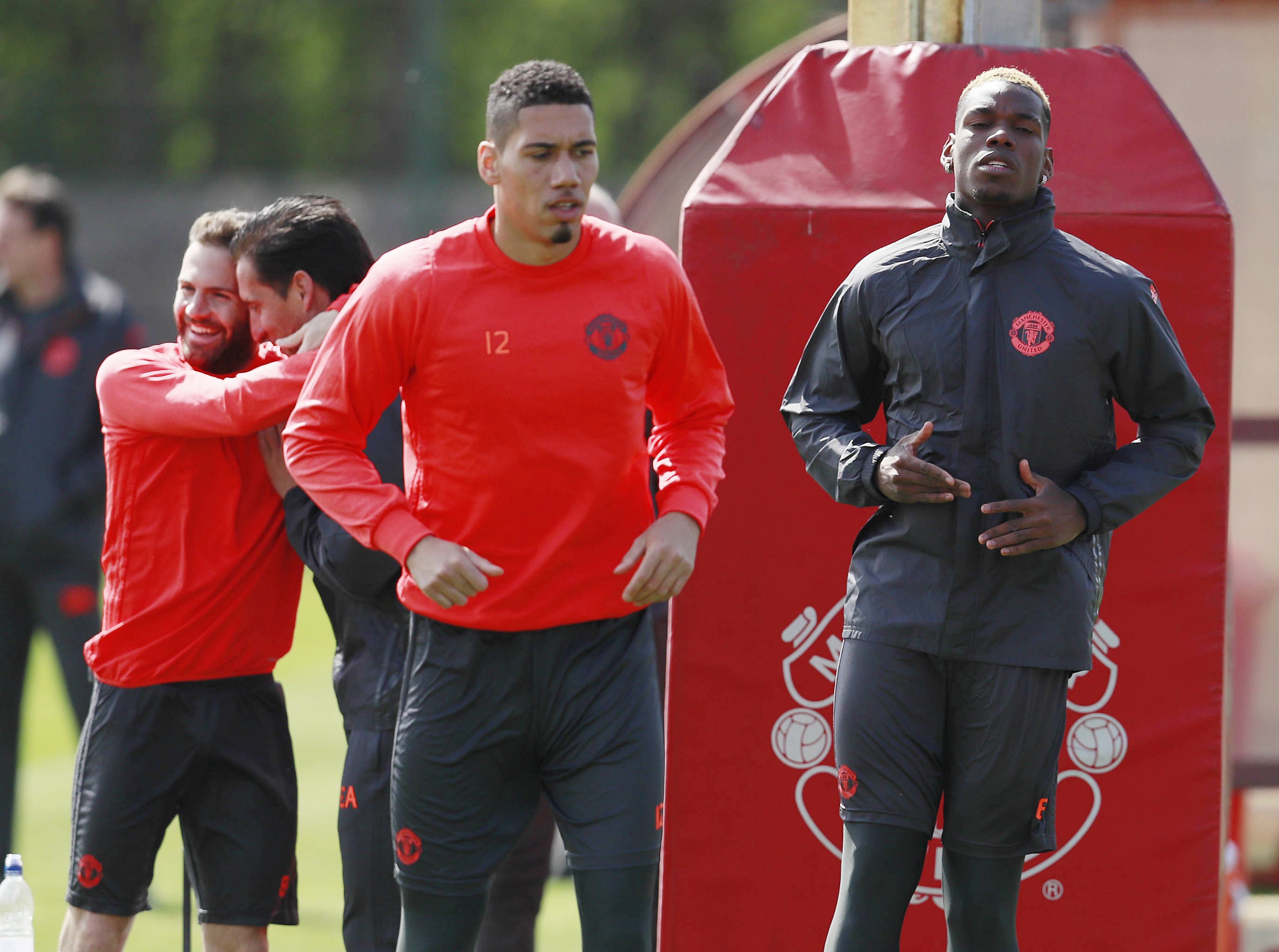 World record signing Paul Pogba (right) has shaken off muscle fatigue and is expected to line-up against Celta Vigo, while defender Chris Smalling is also fit

Manchester United were given a much-needed boost in defence ahead of their Europa League semi-final first leg at Celta Vigo as coach Jose Mourinho said on Wednesday that Phil Jones, Chris Smalling and Eric Bailly had all been passed fit.

Centre-backs Smalling and Jones have not played for six weeks since getting injured on England duty while Bailly has recovered after being forced off during Sunday’s 1-1 draw with Swansea.

While Mourinho has previously criticised Jones and Smalling for being too “cautious” with their injuries, he praised the Ivory Coast international Bailly for returning so quickly.

“Bailly is ready to play, he is this kind of personality that fights against every problem unless it is impossible,” Mourinho told a news conference ahead of Thursday’s game (10.05pm).

Mourinho also said world-record signing Paul Pogba is ready to return against Celta – who are in their first European semi-final and have never won a major trophy – after missing the last two games with muscle fatigue.

Juan Mata, who has been absent for the last six weeks with a groin problem, is also fit although Mourinho said the Spaniard was not ready to play 90 minutes.

The UEFA Cup, the Europa League’s predecessor, was the first European trophy Mourinho lifted, with his Porto side beating Celtic in the 2003 final.

The Portuguese has belittled the competition in the past but reiterated on Wednesday that winning it with United was his priority and his side’s best chance of qualifying for the Champions League after an inconsistent domestic campaign.

The record 20-time English champions are fifth in the Premier League with four games remaining.

Although they are one point behind fourth-placed Manchester City, Mourinho said he was willing to rest players for Sunday’s Premier League game at Arsenal in preparation for next Thursday’s second leg against Celta.

“It is the only competition Manchester United has never won and it would be good to close the cycle and say we have won every competition as a club. It would be important for us as a team and allows us to play Champions League next season,” he said.

“The Europa League becomes now more important for us. It depends on the result tomorrow but if we have to rest players next weekend we are going to do that.

“The Europa League is a long competition, to be in the final the team has to play in a group stage, three knockout phases, you have to travel a lot. So when you arrive in the semi-final you want to be in the final. Celta wants it and we want it.”

Celta meanwhile are confident they have the mental strength to upset United, according to the Spanish side’s striker John Guidetti.
“I think with the mentality we’ve built here, nothing is impossible,” Swede Guidetti, a former Manchester City player, told UEFA.
“We may be a small club and a team that others don’t take much notice of, but we also know how good we are.

“That’s why we’ve beaten Barcelona two years in a row. We knocked Real Madrid out of the Copa (King’s Cup), we’ve beaten Atletico Madrid. We’ve shown that we are a good team.”