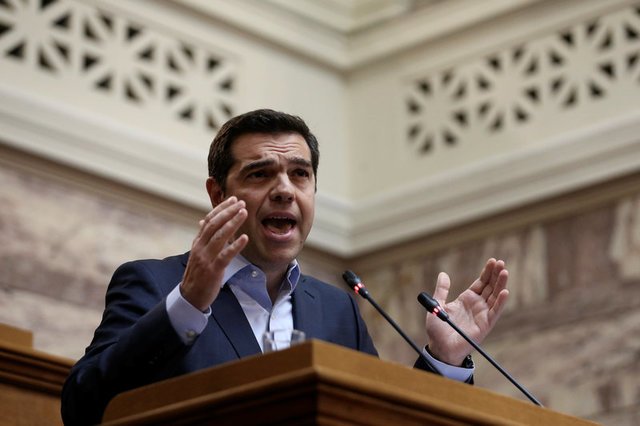 Greek Prime Minister Alexis Tsipras sought on Friday to bring his leftist Syriza party on board to approve a deal reached with international lenders, sweetening the pot by saying any above-target savings this year would go to the Greek people.

He also repeated his mantra that Greece has done its bit with austerity and reforms and that it is now time for the lenders – the European Union and International Monetary Fund – to meet their promises to consider debt relief.

“After five years of promises … our lenders are faced with the obligation to immediately adopt substantial measures to reduce the debt,” Tsipras told his party lawmakers.

He was speaking following Tuesday’s initial deal on a package of reforms – including such unpopular moves as cutting pensions – between creditors and the government.

The agreement ends six months of staff-level haggling and will pave the way for the disbursement of further rescue funds if approved first by the Greek parliament and then by eurozone finance ministers.

Tsipras’s coalition has 153 seats in the 300-seat parliament, which will vote on May 17. He is expected to command his majority, but with major parties such as the conservative New Democracy and the socialist Democratic Alliance-Pasok party opposed, his room for manoeuvre is not broad.

“We are standing before a deal which gives us the prospect of an exit (from the debt crisis), a comprehensive deal,” he said. “It’s in our hand to vindicate the trust that Greek people showed to us.”

The deal includes cutting pensions for the 13th time since 2010, liberalising the energy sector and reducing the general tax-free income allowance.

To make the deal more palatable for Greece, however, the lenders agreed that if budget savings targets are exceeded in 2019 and 2020, Athens will be allowed to implement relief measures, offsetting the impact of austerity.

Tsipras told his party lawmakers that if the country exceeded its primary budget surplus target this year — that is, the balance excluding debt repayments – the excess would be returned to the Greek people.

“When time comes, this government will hand out … what will be left after having overshot its (primary) surplus(targets),” he said.

Greece achieved a 4.2 per cent primary surplus last year, outperforming its 0.5 per cent of GDP target, but Tsipras’ decision to hand out benefits to pensioners as a result upset main lender Berlin.

It is targeting a 1.75 per cent primary surplus this year.

Athens is hoping to get a deal on further debt relief when eurozone finance ministers meet on May 22. It is by no means certain that will happen, however.

Germany, for example, was quick to shoot down a report on Thursday that debt relief measures were under consideration.

“No debt relief is being prepared,” the German finance ministry said in a statement.

UN spokesman: Juncker was sober as a judge in Geneva (Update 2)