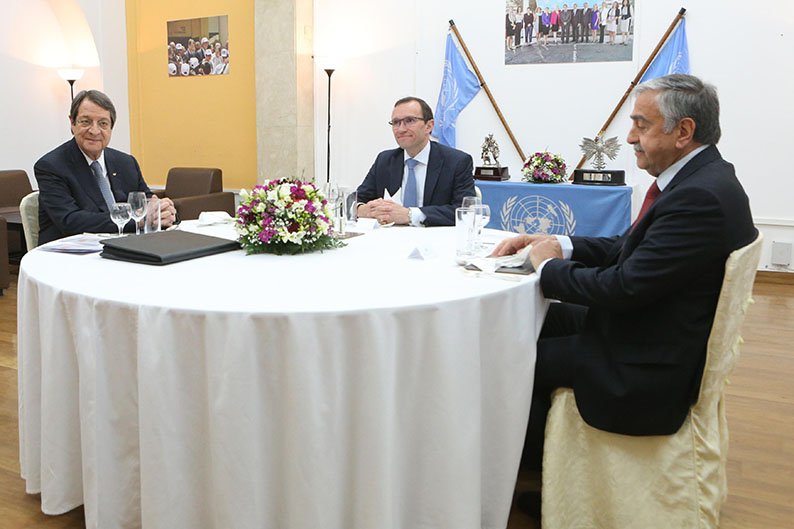 OTHER options might have to be put on the table if Cyprus’ leaders failed to reach a deal in the near future, UNSG Special Adviser on Cyprus Espen Barth Eide has said.

He did not elaborate on what those other options might be.  The comments came in an interview with the Cyprus News Agency in New York ahead of his meeting with UN chief Antonio Guterres.

He tweeted after the meeting: “At a critical juncture in #CyprusTalks, a thorough, strategic discussion with #UNSG @antonioguterres on the way ahead. – at United Nations Secretariat Building“.

In the CNA interview, Eide also warned that a potential showdown over natural gas drilling could be more dramatic than in 2014, when the talks were suspended after President Nicos Anastasiades walked out in protest over Turkey carrying out surveys inside the island’s exclusive economic zone (EEZ)

“If there is a direct showdown over drilling, my worry is that it can be potentially more dramatic than in 2014; because the general mood in the neighbourhood is more dramatic. The EU – Turkey relationship has become more complicated, also the Turkey – Greece relationship and the internal developments have become more complicated,” Eide said in an interview with the Cyprus News Agency in New York. “At the same time, the prospect over a shared gas future for everybody on the island and also with the neighbours is also a positive prospect.”

Asked if he sees the possibility instead of talking about the solution to start talking about confidence building measures, or measures to decrease the tensions in the Mediterranean, Eide said “this is not something we are discussing here now.”

“Right now, the plan we have is to do our utmost to help the leaders to get to a deal in the near future,” he said. “But if that fails, maybe other options have to come on the table.”

The UN diplomat said that they “have to be prepared for a negative outcome if it simply doesn’t work; and what the UN does then,” adding that there is also bigger discussion going on now about the future of peacekeeping missions in general.

According to the Sunday Mail on April 30, in the event of a standstill in negotiations, and with the 2018 election cycle kicking off this summer in the Republic, there are quarters inside the UN considering either a full-on closing down of Unficyp or at the least a scaling down of the Blue Berets.

Eide said he wanted to go to New York now because by June – July things could move very quickly in one direction or the other and “it’s better to start the strategic thinking about these options early than to wait and see and then just scramble when things are there.”

Eide said Anastasiades and Turkish Cypriot leader Mustafa Akinci, wanted to take stock where things were as regards the talks and if there was a possibility to reconvene the Conference on Cyprus or not.

This will be the key topic of their meeting on May 17, he said.

The two sides’ negotiators had made a determined effort to close outstanding issues, he said, but, given “the drilling crisis that might be coming our way and the political dynamics in the pre-electoral period, it is important to use this time as effectively as possible. There is an ongoing discussion here on what we do in the case of success, but also what we do in the case of failure.”

Eide said that if there was a will, it would be possible to proceed with the Conference on Cyprus in Geneva.

He said he needs within his responsibilities to make Guterres and the top leadership here, the five Security Council permanent members, and other interested players aware that “we are approaching a particularly decisive moment, when this round of talks is over.”

He noted that he met the P5 on Thursday and that they fully agreed there were critical weeks ahead. “They keep asking what they can do to help and all of them – including a number of other countries and the EU – are extremely eager to see this through. They are very worried about the prospect of this opportunity to being lost by factors outside of the talks themselves. We are determined, but a degree of worrying is raising and it is important to have that discussion here.”

Meanwhile, Anastasiades said on Friday night that a solution based on injustice would be doomed.

Addressing an event in Paphos he asked that the rights of the Greek Cypriot community were also respected. “Turkish Cypriots must understand that they should demonstrate the same sensitivity we show over their concerns,” he said.
“We know what a federation is all about, we know what democracy means, we know and we make an effort to overcome problems, we know what mutual respect means.”

He said the Turkish Cypriot community must understand that in order for a solution to be accepted by both communities they need to show the same respect towards the Greek Cypriot community as we show for them, he said.
Anastasiades said the Greek Cypriot side had accepted the painful compromise of a bizonal bicommunal federation. It is well known, he added, that more compromises will have to be made in order to achieve a settlement.
Instead of building a state which will collapse the day after, it would be better to insist on dialogue and on the positions which will create the prospects and the conditions for peace, reunification and the withdrawal of Turkish occupation troops, he concluded.