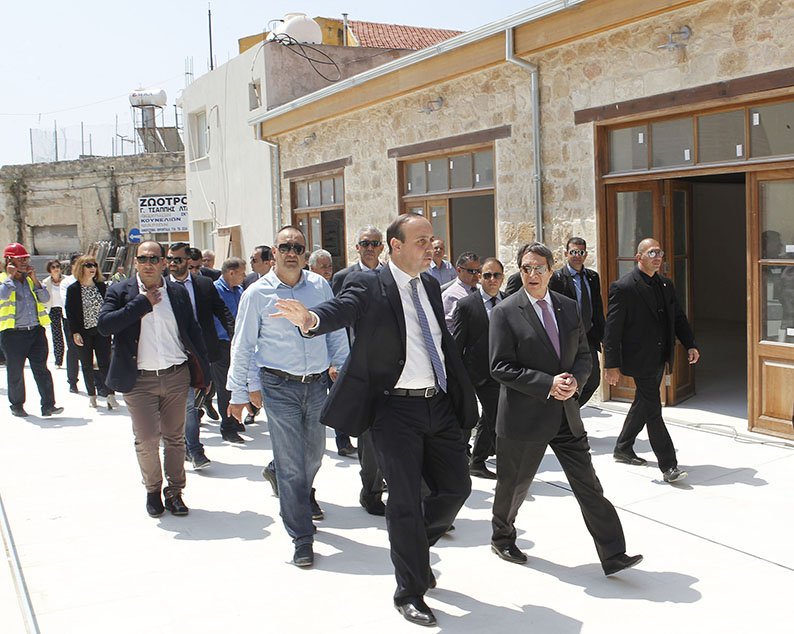 President Nicos Anastasiades said on Friday that by the end of the year, 23 development projects costing €60m will have been completed in Paphos since 2015.

“This was a major development effort right after the stabilisation of our economy,” Anastasiades said at the opening ceremony for the reconstructed Tombs of the Kings Avenue in Paphos, which is the European Capital of Culture for 2017.

Anastasiades said that deadlines for the various projects had been met, meaning that the city received €28m from EU funds and not €15m as had been expected, allowing it to carry out additional work.

He said the completion of the Tombs of the Kings project was important for the improvement of the Paphos road network because it is part of the ring-road linking the city centre with Geroskipou, Peyia and Kissonerga, where there are plans to build a new marina.

The president said the government supports the construction of the marina and blamed the problems over funding for delays to the project, which has been in the works for 10 years. The latest setback was in April when the Poseidon consortium’s €215m bid failed.

He also said a long-delayed project for a highway from Paphos to Polis has not been abandoned but will be looked at as soon as state funds allowed.

During a meeting with local officials, the president announced the creation of a desalination unit to tackle droughts.

“Development and quality of life is everyone’s right,” the president said.

He added that the state spent some €480m on infrastructure projects in all districts with €132m going to Paphos.

“We will continue this development effort with higher intensity,” he said.

The 2017 budget, he said, included €270m for infrastructure projects — €40m earmarked for Paphos.

As regards the Akamas peninsula, the president pledged to have a plan by the end of the year.

Landowners in the Akamas want development rights of property within the Natura designated areas, and for all seaside plots to be included within tourist zones.

The group said that restrictions imposed in 1989 for the protection of the environment but without any “serious scientific study on the necessary measures,” have diminished the value of private property and deprived their owners the possibility of putting their properties to use.

Environmental organisations  want protection of the existing Natura 2000 area, saying giving in to any of the landowners’ demands would constitute a violation of environmental laws, EU directives and international conventions.