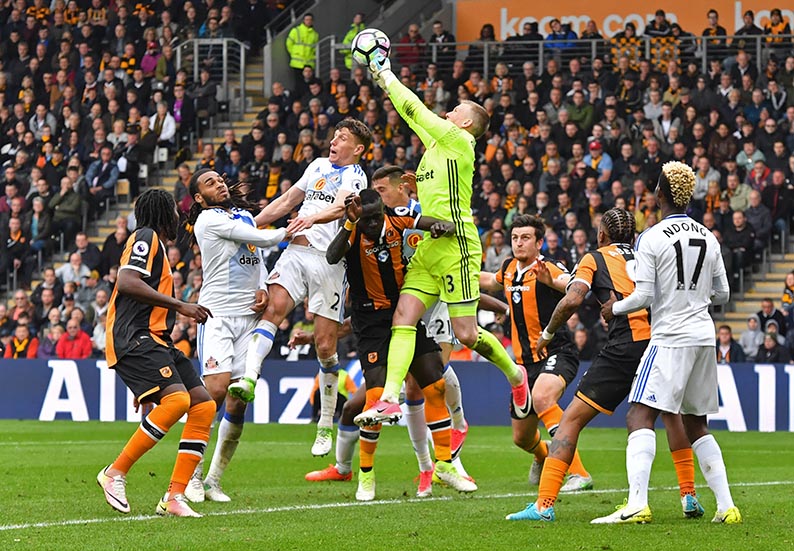 The battle to avoid Premier League relegation took a significant twist on Saturday as Swansea City capitalised on Hull’s defeat to Sunderland with a victory against Everton allowing them to leapfrog the Yorkshire side into 17th place with two games left.

After relegated Sunderland had taken a surprise 2-0 victory at Hull, Fernando Llorente headed the solitary goal as Swansea held on to register a nervous victory and climb out of the bottom three for the first time since March.

Four consecutive home wins had put Hull’s fate firmly in their own hands but, given the chance to pull five points clear of third-from-bottom Swansea City, they suffered an attack of the jitters that could prove fatal.

“It’s disappointing,” Hull manager Marco Silva told the BBC. “We had chances to score in many moments of the game. Ultimately there was big tension in some of the team. We need to be calm in some moments.

“It’s an important moment for us. We didn’t achieve what we wanted from the match but we have two more games.”

Swansea knew a victory in the late kickoff would see them leapfrog Silva’s side and, after Llorente’s goal, the Swans defended stoically until the final whistle prompted a mass outpouring of relief.

“Today was very important to move from 18th. I am very happy because this win is so important. It’s a massive three points and now it depends on us,” Llorente told BT Sport.

“We need to win the two games we have left and this is the way we can do it.”

Champions Leicester City finally ensured their safety with a 3-0 victory at home to Watford, while Stoke City and Bournemouth will be playing top-flight football next season after a 2-2 draw on the south coast.

Stoke ended a 10-hour away-goal drought in the 33rd minute when Bournemouth striker Lys Mousset headed the ball into his own goal but another own goal, from Ryan Shawcross late on, denied Stoke victory.

Burnley are not mathematically safe after they drew 2-2 at home to West Bromwich Albion with Sam Vokes scoring a brace for the hosts.

Manchester City were the only top-six club in action on Saturday and took advantage with a 5-0 thrashing of Crystal Palace who themselves are not safe from the drop after a third consecutive defeat left them in 16th spot.

After two consecutive draws, City needed a win to bolster their top-four prospects and delivered a dazzling display of attacking football to move above Liverpool into third spot.

City never looked back after David Silva’s 50th goal for the club in the second minute although it was not until the second half that the floodgates opened with Vincent Kompany, Kevin de Bruyne, Raheem Sterling and Nicolas Otamendi all on target.

Victory moved City to 69 points, above Liverpool on goal difference. Fifth-placed Manchester United, who play sixth-placed Arsenal on Sunday, have 65.

“To score five against this team is very good and it is an important result for the mini-league fight that we are in for places in the top four,” Manchester City manager Pep Guardiola said.

“Our performance was high level. I’m pleased for our people we can finally enjoy a lot of goals here.”

Palace are still anxiously looking over their shoulders at the teams below them, sitting four points above Hull.

Show them you care with a piece of art