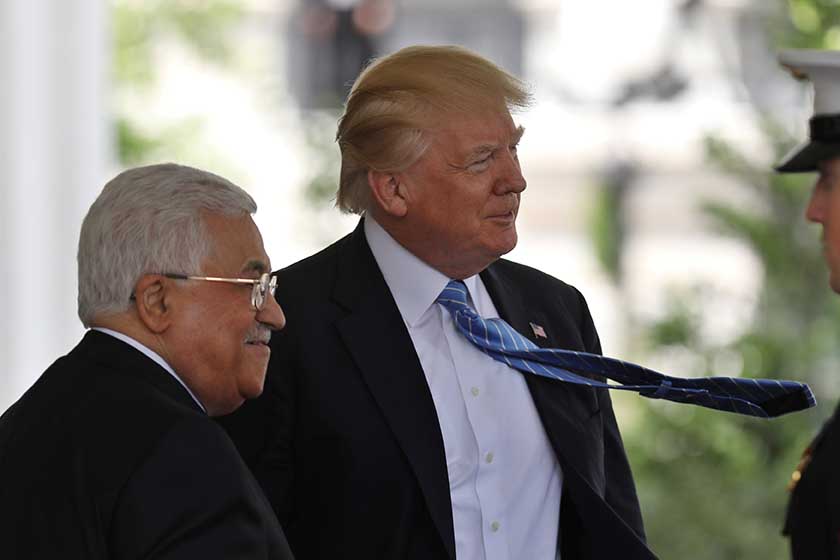 Like other US presidents before him, Donald Trump invited the current Palestinian leader to the White House and told him that there was a “very good chance” of a peace settlement between Israel and a soon-to-be-independent state called Palestine.

The current Palestinian leader, Mahmoud Abbas, did not break with tradition either. Like his predecessor Yasser Arafat (who visited the White House 24 times during Bill Clinton’s two terms as president), Abbas concluded his visit on Wednesday with an optimistic remark: “Now, Mr President, with you we have hope.” But the “peace process” is still dead.

It has been dead for 22 years now, ever since the assassination of Yitzhak Rabin, the Israeli prime minister who signed the Oslo Accords in 1993. That was the peace deal that enshrined the “two-state solution”, with Israeli and Palestinian states living side-by-side in peace, as the agreed goal of the peace talks. But the Jewish fanatic who murdered Rabin in 1995 for promising the Palestinians a state killed the Oslo Accords too.

During the election that followed to replace Rabin, the radical Hamas movement, which opposed any compromise peace between the Palestinians and Israelis, launched a massive terrorist campaign inside Israel. Its purpose was to drive Israeli voters into the arms of the right-wing Likud Party, which also opposed the peace deal. It succeeded.

The winner of the 1996 election was Binyamin Netanyahu, and he has been prime minister for more than half the time since then. Only once, in a single speech at Bar-Ilan University in 2009, has he publicly accepted the principle of a demilitarised but independent Palestinian state in at least some of the territories conquered by Israel in 1967. But that was just to please the United States; he didn’t actually mean it.

During the last Israeli election campaign in 2015, an interviewer from the Israeli news site NRG asked Netanyahu if it was true that a Palestinian nation would never be formed while he is prime minister. “Bibi” (as he is known in Israel) replied simply: “Indeed”.

Bibi is generally more cautious than that, communicating his true views on the “two-state solution” to the Israeli public by nods and winks. He needs to reassure the Israelis who vote for him that it will never happen, but too much frankness annoys Washington, which prefers to pretend that somehow, some time, a Palestinian state is still possible.

The ministers who populate Netanyahu’s cabinet are not under the same pressure to go along with the pretence, because most of what they say stays in Hebrew. British journalist Mehdi Hasan recently collected some of their more revealing remarks, like Interior Minister Silvan Shalom’s speech to a meeting of Likud Party activists in 2012: “We are all against a Palestinian state, there is no question about it.”

Or consider Naftali Bennett, the education minister, who told the New Yorker in 2013: “I will do everything in my power to make sure they never get a state.” Or Tzipi Hotovely, the deputy foreign minister, who told Israel diplomats: “This land is ours. All of it is ours…We expect…the international community to recognise Israel’s right to build homes for Jews in their homeland, everywhere.”

Or Agriculture Minister Uri Ariel, who said in 2013: “We need to state clearly that there won’t be a Palestinian state west of the Jordan river.” Or frankest of all, Science and Technology Minister Danny Danon: “Enough with the two-state solution. Land-for-peace is over. We don’t want a Palestinian state.”

So this umpteenth attempt to revive the corpse of the late lamented peace process is pure charade. It’s something that American presidents do, mostly for domestic reasons, and Mahmoud Abbas goes along with it because he is desperately in need of some face-time with a leader who really is important. (Abbas was elected president of the Palestinian National Authority for four years in 2005, but there has been no election since.)

There’s plenty of blame to go around. The main Palestinian Islamist organisation Hamas withdrew its recognition of Abbas in 2009, and has since ruled the Gaza Strip, its stronghold, as a separate Palestinian proto-state. This gives the Israelis the quite reasonable excuse that there is no united Palestinian authority they can negotiate with.

The brutal truth is that the two-state solution’s time is past. Israel has become so strong militarily that it is the region’s dwarf superpower, so it no longer needs to trade land for peace. Many of the neighbouring Arab states, obsessed by their own much bigger security threats and civil wars, have been cooperating quietly with Israel for years now.

Israeli rule over four and a half million non-citizen Palestinians has already lasted half a century. There is no convincing reason why it cannot last for another half-century, although there is bound to be an eruption of Palestinian resistance from time to time.

Questions must be asked about the validity of the Turkish referendum